On Saturday a man vandalized the Fontana del Moro in Piazza Navona, knocking off two chunks off marble, the creatures faces adjacent to the larger head above. The pieces have been recovered and can be reattached to the sculpture. The vandal has been caught and has confessed. It is a copy of the original by 16th-century artist Giacomo della Porta and is in the south end of the piazza. Bernini added the central figure later. The fountain is by itself with lots of space around it for musicians with speakers to set up and for visitors feeling the exuberance of the space to dance in one of the most perfect piazzas.

I imagined a notice that read : “The City has announced that next Friday evening the hands of the criminal vandal will be cut off in the piazza. This public retribution will discourage this crime, which is a crime against us all.”

These imaginings were not desires or wishes on my part, only speculation about how different cultures and times have addressed this problem. I am a citizen of this time and expect some lesser measure of justice while at the same time hoping for repentance from the crazy wretch.

Piazza Navona is a short distance from Piazza Campo Fiori where the philosopher Diordano Bruno broods now in a monumental hooded bronze. He was burned at the stake there in 1600 for heresy. 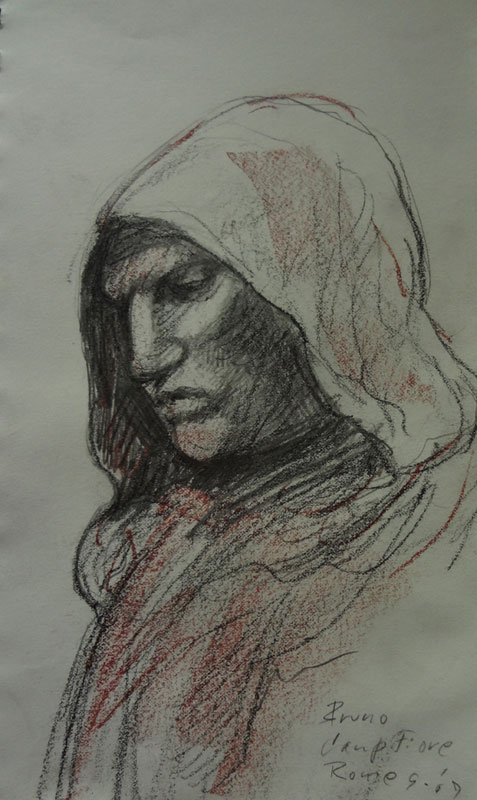 Drawing of Bruno, by the author.

“The broken windows theory is a criminological theory of the norm setting and signaling effects of urban disorder and vandalism on additional crime and anti-social behavior. The theory states that monitoring and maintaining urban environments in a well-ordered condition may prevent further vandalism as well as an escalation into more serious crime.”- Wikipedia Encyclopedia. Stop the small crime and you can stop the big crime.

The theory was put into practice in New York City in 1993 by Mayor Rudolf Giuliani under the rubrics of “zero tolerance” and “quality of life”. The city went from one that was being abandoned to becoming a very attractive livable city in a short time.

We all remember the kids on the beach building sand castles. Some castles became elaborate even though there was always cognizance of the impermanence of the structures. We also recall the bad kid who would knock them down. There are those who build up and those who tear down.