Images do have meaning. Martin Luther King had a dream.  Forty three years after his death he has a grand monument on the Washington Mall. It was just dedicated with the first Black President of the present.  It is fitting in location and in monumental scale. It is a wonderful appropriate gesture of tribute for such a great man. But the art is not right. Many say that the portrait of Reverend King is more like a nightmare because it doesn’t look like him. Isn’t there in the concept of “portrait” something that should include visual information about the individual.  He was never standing still, he was always marching.  He redefined the word ‘to march”.  He was a visionary, a preacher, he was inspired. He was not fat and bloated like a dough boy or inflatable character. He was a small quick man. We have a wealth of photographs and videos of his impassioned speech and intense striving. 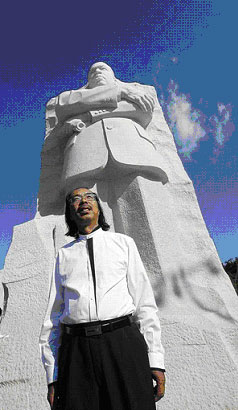 The sculptor of the King sculpture is Chinese. There is no problem with his being Chinese, there is a problem with the kind of art that he has made. It is specific and has a particular meaning that does not fit with Dr. King. He has made sculptures of the dictator Mao. The answer given to the critics is that he was the best sculptor.  It is a monumental figure coming out of the massive block. Wouldn’t it have been wise to choose an artist who can do portraits?

It has a look of Socialist Realism.  Denver-based artist Ed Dwight, who was on an early planning team for the memorial, told USA Today, “Dr. King would be turning over in his grave if he knew the sculptor was from a communist country”. Is this just an unreasonable prejudice?  Maybe it is not, if you look at the result, and realize that it may be a product of the aesthetic formation of the sculptor molded by the countless images of Chairman Mao Zedong that he made projecting dictatorial authority.

This may sound like a familiar refrain from me because of an article I wrote about the new sculpture of Pope John Paul II in front of the train station in Rome.-Papa Wojtyla as Capeman.. The disliked the bronze because it did not look like the pope who was seen and recognized in person by more people than anyone else in history.  Romans thought the statue looked like Mussolini.  It is an inane pose, the pope holding out his cape to envelope all.  A literature professor friend said, “It’s Marxist, turning the individual into the collective.”

The crossed arms of the pose of Dr. King speak more about repose than about the true gestures of the crusader, martyr, spiritual civil rights leader who was beaten, jailed and finally assassinated. He was a visionary. Do you remember his determined walk as he crossed the in ?  I remember his face and the way he leaned forward and looked out to the distance giving the speech at the Memorial, the “I have a dream speech”.

Portraiture has a base in proportion. If each feature is correct in size and shape you can have a “likeness”.  Sometimes by magic or accident, after working for a likeness, an artist can capture something of the essence, or the soul, of the individual.  The greatness of many important artists has been based upon their desire and ability to do portraits. These include Titian, Caravaggio, Rembrandt, Vermeer, Rubens, along with the American sculptors Daniel Chester French and Augustus Saint Gaudens. 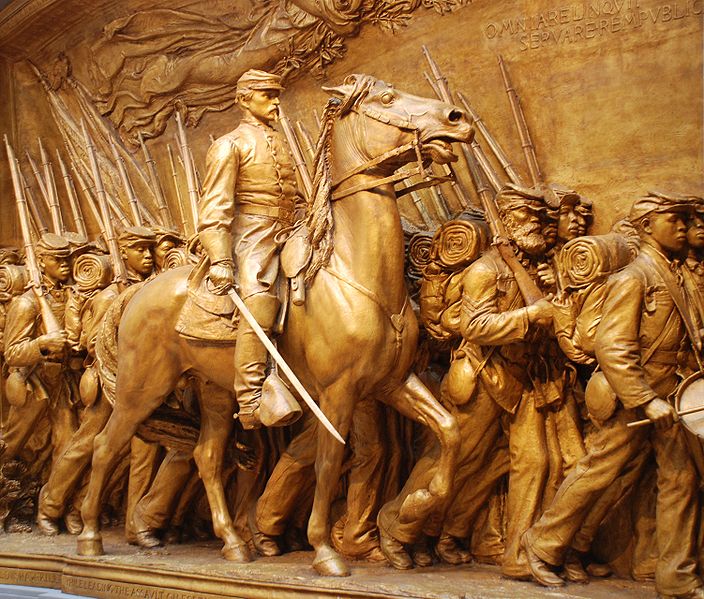 One of the greatest public sculptures in the is the Shaw Memorial by Saint Gaudens, opposite the State House in .  It is a civil rights memorial of the Civil War Massachusetts 54th Regiment, the all black unit led by the young white Colonel Robert Gould Shaw from . The portrait of Shaw is extraordinary and you are able to know the man. The soldiers are portraits done from life and they are individuals.

Shaw lived across the street on and he was chosen by the Governor to lead this regiment because his parents were devoted abolitionists who had fought to end slavery for many years.

The does not look like Dr. King.  The pose is passive, he is back on his heels. It signifies rest, the job is done. King never rested, the struggle went on. As with so many prophets and martyrs, he knew his own death was imminent.  His eyes swelled up in his other unforgettable speech just before he was shot, when he said, “I might not get there with you.”

With Reverend Martin Luther King, President John F. Kennedy, and Pope John Paul II the record of photographs and movies is vast and rich with information about the appearance and movements of the person.  That is why it is such a travesty to have a sculpture of John Paul in Rome and a sculpture of Reverend King in DC that do not look like the men that we came to know.

Professor Isabel MacIlvain from has created a memorable portrait of JFK. It is right across the street from the Shaw Memorial outside the Massachusetts State House.  Her likeness of his face is perfect and she has captured his characteristic stride. She told me she wished that she could have sculpted him in a toga so there would be more ample curves and shapes to mold.  She had his actual suit and she said that the family was nervous to get it back from her.  The family was involved. She is one of many excellent known American sculptors who would have done justice to a King memorial.

It’s too late now. The process was flawed. There are sculptors who can do portraits. Why didn’t someone say in the beginning, “No, that’s a bad idea, Martin never posed like a dictator.”