Carving by the Michelangelo Quarry in

I am carving a block of marble from the Michelangelo Quarry in . I am in an outdoor carving studio by the side of the road that leads to that quarry. I am told that where I am standing is the old road that Michelangelo would have walked daily going to the city below and to the quarries above.

Even though Michelangelo is a large industry here, no one has bothered to learn in particular how he carved, that very thing which most reveals how he thought, indeed that individual attribute which explains why he was such a great artist.

I carve using the same tools and the method that the great sculptor used. It is not due to any brilliance or even diligence on my part. It is do to the fact that I had no other teacher. I was trained in drawing and painting at Rhode Island School of Design. I moved to , not far from Vermont Marble Company. The road bed was raised with ruble, waste marble, from the quarry. I picked up a boulder and tried to carve it with a screw driver. Eventually some better tools enabled me to cease hitting that same thumb bone. But still there was no teacher.

I studied Michelangelo’s marble sculptures. I did not want to read the endless discussions by the art historians about the socio-economic conditions of his life or their endless speculations about what this or that sculpture truly means.  I cleared my mind and just looked at the sculptures for long periods of time. Things began to become evident from the physical record, like an archaeological record, especially from his many unfinished carvings. Oh, I see this tool came first, the point chisel, pushed by a heavy hammer leaving deep parallel grooves, roughing out the shapes, and it is followed by the toothed chisel going around the form, cross hatching. 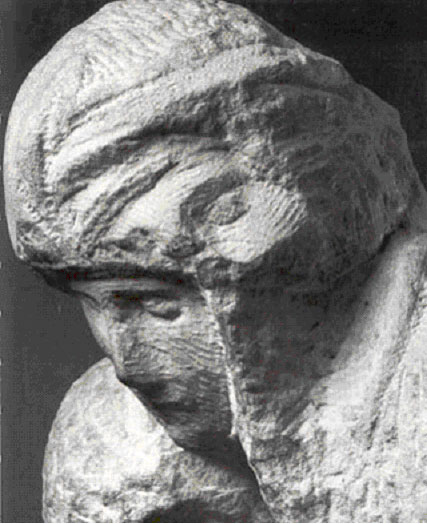 By looking at how Michelangelo carved marble we can understand a great deal about how he thought  His sculptural process informed how he painted and how he designed architecture. Because that process is only subtractive it bears investigation because it is not the normal way that artists create.

The master sculptor’s little understood and much discussed Non- Finito of his sculpture can only be understood in light of his carving methods.

The Non-Finito refers to his leaving many marble carvings unfinished. There still exists, among experts, considerable debate on the subject. Traditional art historians with their extensive knowledge of peripheral events in the artist’s life will maintain that he was pulled from job to job by patrons and Popes. On the other extreme, romantic Modernists insist that he left works unfinished for reasons of self expression.

The photograph above is of Michelangelo’s last Pieta, Pieta Rondanini, the marble that he was working on six days before he died. Note that there is the remnant on the top of the veil of the Virgin of her face looking in a completely different direction. That reveals an earlier version of the work and shows us how radically the master changed the composition. It also shows us how he thinks with his tools searching for forms and what tools he used to find big forms, the point chisel removing large chunks of stone, and the tooth chisel going around big shapes. He continues to draw as the sculpture progresses. He trusts his eyes. This separates him from other sculptors, even Gian Lorenzo Bernini the master of flying drapery in marble, because it was necessary for Bernini to follow his models more carefully. For Michelangelo it is a dialogue, it becomes like combat. Interesting that Raphael painted Michelangelo in his School of Athens as Hericlitus, the philosopher who said- the only thing constant is change.

Michelangelo was working on the Pieta Rondanini  just before he died at age almost eighty nine. It was in his studio and then in the in . A mystery is the large arm attached only by a tab of marble. Many bizarre speculations have been written about why the arm is there. I wanted to know why. I knew that I had to see the back of the sculpture. When I taught some Drawing classes at I used to have long conversations with one of the most renowned Michelangelo scholars in the world, John Shearman. He told me that he had to see the back of the marble Moses in the in Vincoli in . He went over the ropes and was grabbed by the guards. I told him I was going over the ropes to see what was behind Michelangelo’s last Pieta. When I went to in 2005 to see the Rondanini. There was no need to go over the ropes. The sculpture was in the middle of the room, not in a niche as it had been for so long.

Now, I wish to show that a true understanding of this unique practice, by a Renaissance artist, one who was paid to finish works, can only be grasped by understanding his relationship to the block of marble. I assert his intentionality with regard to the non-finito for two reasons. Contemporary scholar William Wallace has pointed out that Michelangelo had a sense of his own place in history and that he would always leave one job to go to a better one, to a better opportunity. His sense of himself allowed him to resist external pressures to finish works, to some degree. Secondly, we must assume that when someone does something repeatedly and consistently that it is intentional. Especially if he had shown good judgment in managing his projects before. Leaving some works in rough states is intentional.

The non-finito is a direct result of his technique. He uncovered forms within the block of stone and he finished some parts prematurely to aid his vision. Rather than relying on models that he had previously made, he preferred to draw, to measure with his eyes. In this way the process of carving was direct, immediate, open to change, and dynamic. 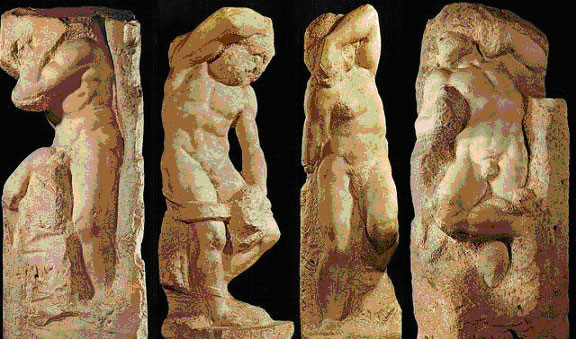 There are two different groups of unfinished works. His Captives in the Academia in show how he began to find the figure in the block. In these we can guess that, yes, he would have finished them more over time. Many of us are pleased that he did not, because we can look over his shoulder and see how he began and how he carved. He dived into the depth of the block to find the energy of the torso and only then, determined where limbs could be and how big they would be.

There are other works left unfinished where we can surmise that he left them that way because of the way they looked. He made an aesthetic judgment.

The two large round Madonnas with Child, the two tondi, are examples of this. He considered them finished. They have tool marks from the roughing out point chisel, the subia,  as well as extensive modeling with the tooth chisel, the gradina. 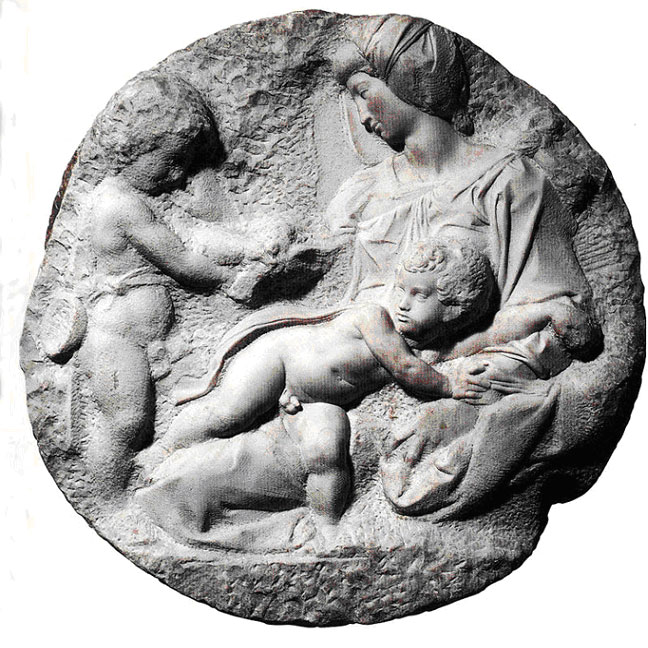 Madonna and Child with the Infant Baptist (Taddei Tondo), Royal , . 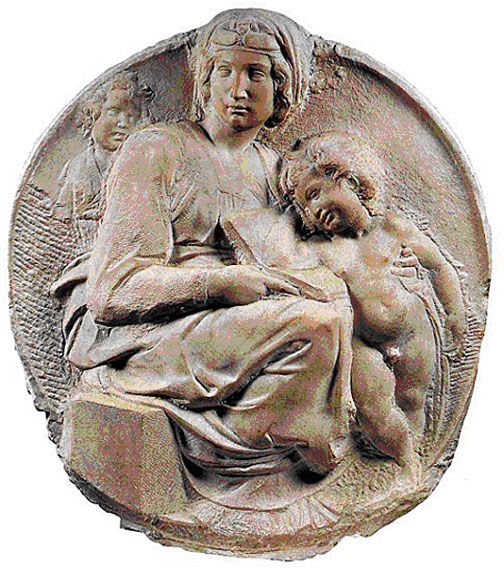 His portrait of Brutus is another example of a carving with multiple textures from different tools that is considered finished. There are two Pietas unfinished. The Florentine Duomo one may have been finished but for a flaw in the ,marble which apparently caused the sculptor to smash it with a hammer. A leg of Christ is completely missing. It is interesting that on display viewers accept this as a complete work. The other unfinished Pieta is the Rondanini.

One of my first sculptures was from a boulder from the side of the road shaped like an egg. I carved a simple profile on it. Then as I looked at it for some weeks, it occurred to me that there may be another face inside, under the one on the surface. I uncovered it as if breaking through an egg shell. It is called Egg Head Muse. Michelangelo’s carving method is one of uncovering and in particular, uncovering and prematurely finishing some area, a high point, and then using that as a visual starting point to measure from, measuring from what is finished to see the rest of the form. Unlike other sculptors he, and subsequently I, reserve the right to make changes based on drawing decisions using evidence from parts that are finished. Essentially this tells how his non-finito method of carving differs from all linear reasonable methods based on roughing out all over. 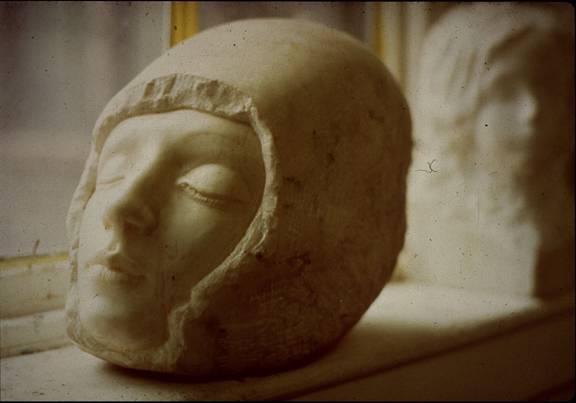 There exists a bias in favor of the logical, the sequential, based on the broad assumption that because clay modeling is easier it must be better. More control is always better. Model in clay, cast in plaster, give that to an artisan who can deal with the intractable hard stone and make a copy. The problem is the best results are copies, and can be lifeless the further removed you become from the hand of the artist.

Michelangelo’s carvings are dynamic because carving is not just a means to reproduce something conceived by modeling in clay, by adding on. Carving is a way of thinking, a way of seeing what is not yet there. Each tool leaves a surface rich in suggesting forms. For me now, even the point chisel breaking off large chunks of stone can leave a surface that will suggest, for example, drapery folds. It is similar to Leonardo’s advice to artists to study stains on a wall or on paper and envision a landscape. It is collaborative as apposed to an imposition of will upon the material.

Which brings us to the all pervasive contemporary method of carving marble at this time. It is done with an electric grinder with diamond embedded abrasive disks. It is fast and efficient. But the method dictates the shapes. The result is the all pervasive style in and Pietrasanta of figures with general smooth shapes and what I have named “Grinder Heads”. The tool wants to make general shapes. An example of considerable tonnage is the public sculpture in with a grinder head. Grinder heads are ubiquitous. 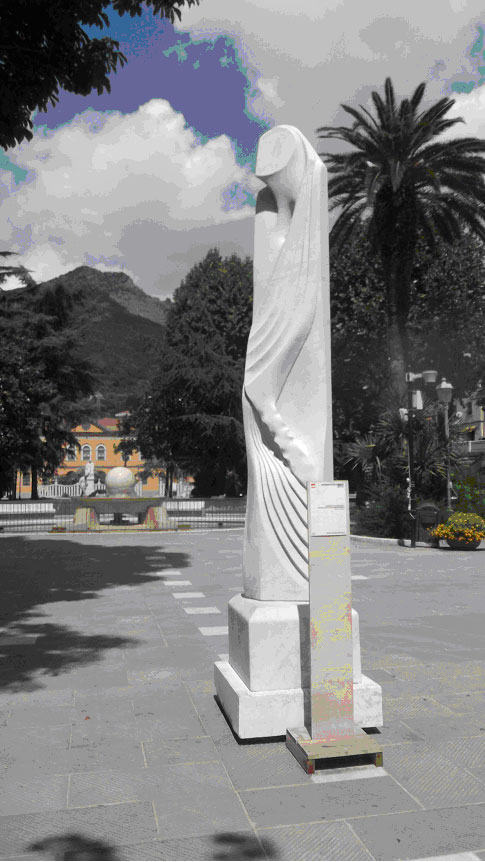 Sculptors from the present diamond grinder age think it is too hard to learn what a face looks like, too hard to learn anatomy, too difficult to study the masters. We are in the grinder head era now, the computer carving era is fast upon us.

Does settling for grinder heads come from a form of Relativism that proposes that all truths are equal, all methods of expressing oneself are all right, things do not have value, or quality in themselves? Who could ever judge such a thing as quality? When Truth is taken apart, Beauty falls and breaks like an egg shell, they fall together.

The methods and means of carving marble dictate how the sculptures look.