He smiled and said, “Oh, you recognize me from the portrait he did of me that is in the Church of Santa Maria del Popolo in Rome.” 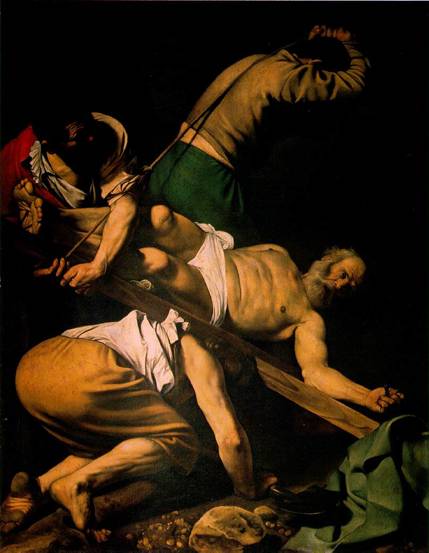 I liked Saint Peter as I liked most of the fishermen that I have known. They are honest like tradesmen, but a little different. Fishermen have far looking eyes, to the horizon, as the sun goes up and down, and they are driven to search the deep.

He asked, “Did you know we have reproductions here?”

I said I did not. He went on, “Yes, my mother has that one, she likes it, even thou it’s my upside down crucifixion.”

I asked again, “And Caravaggio? I just read that maybe his, you know, his trouble, his capital murder offense in Rome, that maybe it was self defense, this from a serious researcher.” Saint Peter replied, “Yes, he’s here. He’s with the artists. And you want to speak with him? Interviews are such timely things. I can’t really let you in.” With passion I said, “I need to know, we all need to know the facts.”

He waited a minute then said, “Oh, yes, yes, the facts. The historians and journalists, (only a few journalists) they have the facts. It’s not as light as where the artists are. You might think it is musty with all those volumes of facts. But we like writers that leave room for mystery, you know that different kind of truth. We greatly value understanding but realize that we can not know everything.”

Then he said, “I’ll see if Caravaggio will consent to come out to the porch. We have all the time in the world, but you don’t, you are not supposed to be here, so you must be brief.”

He said, “There are a few things that I should tell you. You may find out whatever you can from the great painter but you must understand that we do not have a scale here to measure things, like five assaults against however many, say seven, great portraits of the Blessed Virgin, not to mention all those virile, human, incarnations in paint of Jesus. It’s not like that at all. It’s about the heart. Don’t misunderstand, Justice must be served, but we are constantly dazzled by the brilliance of mercy that covers it. And, I’m here at the gate especially because I required more second chances than anyone.” 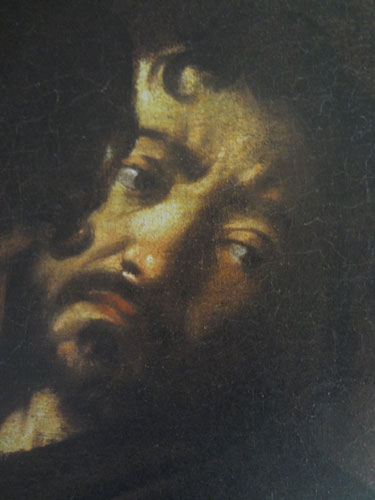 Caravaggio looked very much like his self portraits except that he was not so round, was finer, thinner, and quick. When he saw me, he saw all of me, measuring me with his eyes. He was dressed all in black. When he sat opposite me I thought he was going to put his boots on the table as he leaned back. He smiled and kicked my shoes and said “running boots”. I said, “running shoes”. He repeated slowly rolling the “R” and drawing out the “shoes”. He asked, “You do sport, and do you fight?” I said I did in my foolish youth. I only wanted to ask him about sword fighting and paint mixtures and techniques but I thought I had to get some other things out of the way first.

“Maestro, can I ask you a few questions? I have found new information about the swordfight and homicide, and I would like to ask you about your death, there is also much speculation about that. And incredible as it may seem, scholars and newspapers are saying that you used a form of photography to make your paintings!”

His restlessness went to relaxation and he said, “Yes, I do have time.”

“I just read that in Campo Marzio in 1606, maybe…here it is. A researcher named Francesco Tresoldi has written that,”

The Truth of the Conviction of Murder- devoting years to documentary research on the life of Caravaggio, I have had the opportunity to investigate what may have been the truth of the facts at the time of the killing of Ranuccio Tomassoni by Caravaggio. In an effort to defend him from so many frivolous interpretations… a careful evaluation, therefore, would have favored the judges of the Roman court at that time to arrive at a ‘no condemnation’, considering the fact that Caravaggio after being attacked, killed Tomassoni only to defend himself.

The artist said, “Oh, yes, we have been over that here, no need to go into it further. And you do know that the charge was dropped and in Rome, the case is closed.”

I replied, “Yes, I saw, ‘non condanna’ and on a city document case closed. And then later there was the full pardon.”

Caravaggio said, “Those … I must watch my tongue here. You heard about the pornographic poem demeaning my biographer, Baglione, and his art that got me in trouble.”

I did hear of it and continued, “I loved what you said at trial, one of only two times that you spoke in court. When they asked, ‘Are you the poet?’ you said, Poet? The one who wrote that is a critic of art.”

He reminisced, “Yes, that was fun. I was so misunderstood. I was a sensitive boy. You are smiling? I have fun with my friends here, they think my life was a series of mishaps interspersed with good art. I did have a sense of humor and I had a sense of what I must do, a sense of the importance of my work painting. You know how it is. No body said “Please, Caravaggio will you work hard day after day to make beautiful paintings”. It had to come from me. Do you think I could drink and fight all the time and have such a steady hand? You don’t have to answer that.”

I wanted to know more, so then I asked, “And your other biographer, Bellori, if we should call him that, your other slanderer, said you ‘died as miserably as you had lived’. Was he right?”

“No, not true at all. I knew what I had accomplished. I died in peace. I had more ideas to paint, but I had to leave some room for future artists. It was a most amazing, beautiful life, always full of surprises, and full of love.”

I noticed an angel that was quietly telling me that I had to go. I pointed and asked, “Did you do a portrait of him, or her?”

He shook his head and said, “Yes, yes, I painted her. You probably never saw the painting, the first Saint Matthew and the Angel, the one that was destroyed with bombs in Berlin.”

I told him that I knew of the painting from the black and white photograph. 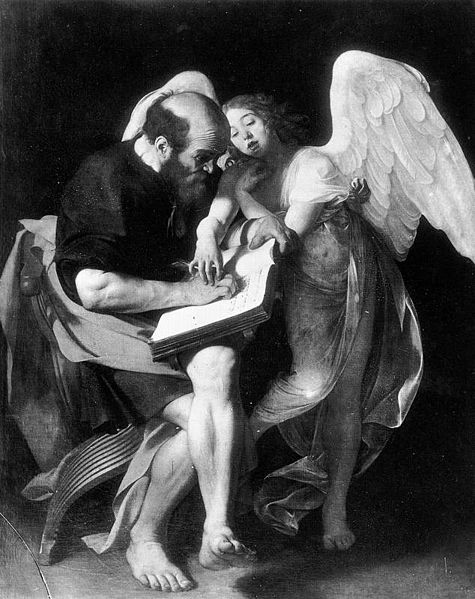 The painter said, “You know the funny thing is, here you find out that, for example, that angel that I dreamt up, that I painted, came from somewhere, not exactly the same of course, I made her up, but related. You find out that so many dreams are in fact real. Interesting don’t you think? And the way art happens, I find it endlessly fascinating. Someday I’ll tell you about the color of that first painting with the angel. There are some singing yellows, and I began to explore the red, orange, and light green together.”

Then he continued, “As with many of my paintings, this one was rejected. They said that the saint was not refined. I painted the second version quickly using a different model.”

I said, “May I ask you about some other things. I’m not making this up. I have to force myself to read this trash. This is a headline from the…”

Telegraph, from the UK : Caravaggio used ‘photography’ to create masterpieces -Renaissance artist Caravaggio used an early form of photography to project images of his subjects onto a canvas using a noxious concoction of crushed dramatic fireflies and white lead. Published March 10, 2009 by Nick Squires in Rome.

“Someone should tell Squires that you were born a hundred years too late to be a Renaissance artist.

Maestro, you can tell us, was your secret crushed fireflies?”

Then I said “And it seems the Telegraph is out to get you, you are a Counter Reformation artist. They are determined to take the mystery out of your art and turn you into a hack.”

Telegraph July 13, 2010- headline-‘ How Caravaggio saw in the Dark- The scoundrel and a killer, but did he also use a machine to help him “cheat” as he created his paintings? Martin Gayford sheds new light on a 400 year old mystery.’

“They always trot out the camera obscura especially with you and Vermeer because your art is so beautifully inexplicable. David Hockney has proposed its use by old masters because his own drawing is based on photographs and that is all that he knows. He and others can not imagine that a mind could have such a clear vision without the aid of a little box with a pin hole. And it is the mind that has the clear vision, not the eyes.”

I continued, “This can only be understood as a manifestation of the need to reduce art to technology and take the very art and mystery out of it. Kantian aesthetics, Modernist aesthetics, comes from Descarte’s dualism, ‘Cogito ergo sum.’ If body and soul are separated, then matter can be controlled, and art can be understood solely in the terms of technology. Man rules Nature and man is the independent creator and not a creature. Creature-hood embraces an overall contextual inspiration, a ‘breathing in’, rather than an isolated dominance, the dominance of science that takes apart.”

He responded, “My art, it is paint on canvas and I put it on with these hands. It was not easy. It was the most difficult and fun thing that I could think of to do. I enjoyed sharing some ideas with you.”

Caravaggio got up, looked behind where he was standing, as if to see if he was being followed, then he laughed and tapped me on the shoulder and said, “Va bene, ci vediamo.”