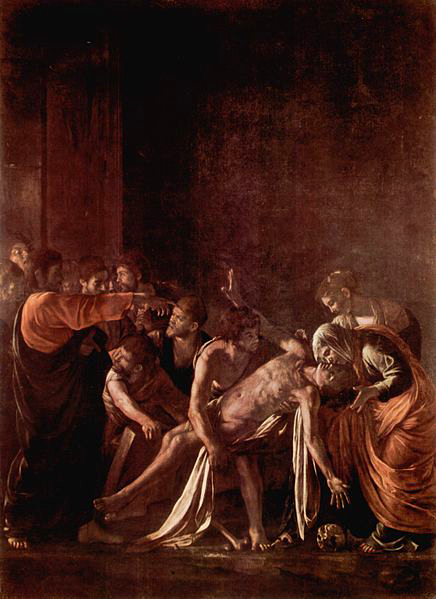 In Caravaggio’s painting The Resurrection of Lazarus, Lazarus has the pose that Christ would have on the cross. One gets his body back, the other gives it away for a time. The raising of Lazarus in the gospel narrative is about the body and death before the story of the cross.

The cross without a body has become a symbol. There is nobody, no body. The removal of the body from the cross was Reformation Iconoclasm’s first step in progressing toward an abstract art and the ability to fashion a purely personal religion. The cross without a body is a symbol, and as such, one is allowed to make up one’s own meaning. The enfleshed story was discarded.  We profess “the resurrection of the body” in our creed.

“The only really effective apologia for Christianity comes down to two arguments, namely, the saints the Church has produced and the art which has grown in her womb.” Cardinal Joseph Ratzinger, The Ratzinger Report  Messori, 1988.

Pope Benedict, the intellectual, does not mention a philosophical system or an academic tradition. He highlights two real things that inspire pilgrimages. Pilgrims go to Assisi because Saint Francis was there. “Backpacking pilgrims for art”, as I have called them, go to the Sistine Chapel, and they go all over Europe retracing the steps of pilgrims of the faith from centuries before.

Caravaggio’s art is about meaning. Right away, with clarity, we understand what the master story teller gives us. He tells stories with flesh.

Caravaggio killed a man in Rome in a sword fight duel on May 28, 1606. In 1609, he was in Sicily, still in exile, on the run, with a price on his head. He would be pardoned by Pope Paul V to return to Rome in 1610, but he never made it back, and died in July of that year at age thirty nine. He was at Port Ercole on a beach chasing a boat that had sailed away on the way to Rome with his paintings. Not long before, true to form, he fled Malta to go to Sicily. When he was made a Knight of Malta, this was a good sign that he would be pardoned to return to Rome with honor. Alas, there was yet another sword fight and he was immediately imprisonment in the inescapable fortress of Sant Angelo. Remarkably, he escaped with a rope and sailed away to Sicily.

In Messina he received an important commission to paint The Resurrection of Lazarus. The size of the painting signified that his great gifts as a painter were still highly prized.

The raising of Lazarus is in the Gospel of Saint John, the evangelist. There is an intimate human element in the Lazarus story that perhaps only John, the disciple that Jesus loved, knew. When Jesus learned that his friend had died, he wept.  When he did go to Bethany, Lazarus was buried and had been dead for four days. The narrative gets more concrete and realistic when the master is cautioned that there may be a stench.

Of course the realism of the gospel narrative is not lost on Caravaggio. He used models from the hospital in Messina and made them hold a dead man, a stiff, from the hospital. He would paint the stench.

Caravaggio often compresses time for the sake of the narrative, we get it all at once. Jesus is calling “Lazarus come out” and Lazarus is already half way up.

In Messina the local vocal art critics trash talked the painting. Caravaggio acted as he had done before. Easily insulted, he drew his sword and slashed. This time it was the painting. Then again, as he had done in two cases that we know of, he repainted quickly and successfully the rejected Saint Matthew and the Angel and the rejected Conversion of Saint Paul. This accounts for how he pulled form out of the darkness with cursive single strokes of the brush loaded with light paint.

There are many similarities with earlier Roman works. Especially striking is the repeat pose of Jesus pointing, the gesture that he borrowed from Michelangelo’s Creation of Adam from the Sistine Chapel ceiling fresco. The Counter Reformation painter used it in The Calling of Saint Matthew, where Jesus leans forward and points at Matthew. In the French church in Rome he is pointing and calling the tax collector. In the resurrection scene he is raising, leaning back slightly, like a puppeteer pulling up his friend. Gone are the rich expanses of glowing flesh and brilliant reds.  All of the forms are recognizable in the dark haze only from the way the light just touches them and reveals shape. The light is illusive, hitting and skipping along from left to right. Less is better. He decides which characters reveal themselves and which of them remain as only a hint in darkness where we must imagine their essence solely from the gestures.

As in several of his group paintings there is in the Raising of Lazarus a half hidden self-portrait. The usual expressions in earlier paintings were of disinterest or amazement. But now, because of what he had lived through, there was an expression bordering on horror. He is the figure in the back on the far left.

Everything comes out of the dark. That is how he paints in his mature somber style reflecting the intense troubles of his later life even though he still paints miracles. He always knew about death, and even death on the streets, but now it is what he thinks about and paints more than anything else. He is like the old Titian and the old Rembrandt who threw away the fine sable pointed brushes and were confident to load a large bristle brush with a thick glob of lead white paint and with one stroke describe, for example, the jaw of a rising man or the cheek bones of his sisters. Painting became like thinking for these masters.

I heard Bishop Robert Barron say recently that words can change reality. He used the example of Jesus saying, “Lazarus come out”. Another example that he gave was when an umpire at a baseball game said, “You are out.” You are then, in fact out. He related what Flannery O’Connor said at a distinguished literary dinner when someone said, “What a nice symbol the Eucharist is.” Flannery said, “Well, if it’s a symbol, to hell with it.”

Caravaggio would never paint a cross without a body. He painted stories.