Caravaggio on the Run in

The Beheading of Saint John the Baptist in the cathedral in is the only painting that Caravaggio ever signed. He signed it in the Baptist’s blood on the pavement. A woman looks on and clasps her own head with two hands in horror and Salome holds the platter that the executioner points to, the basin for head. 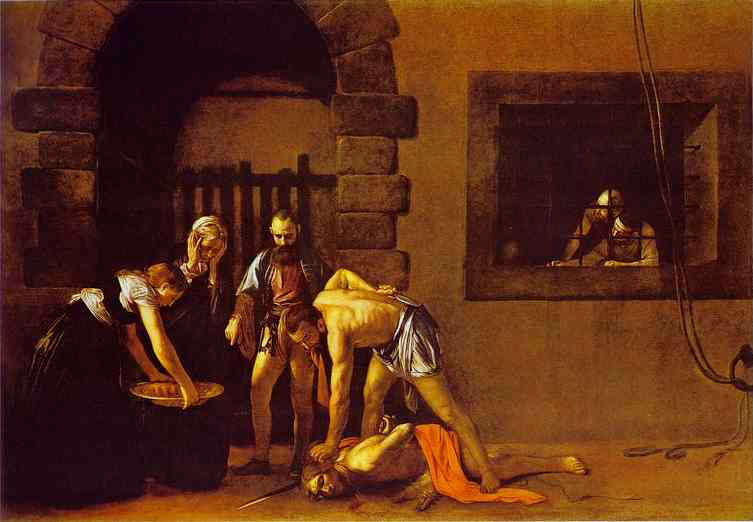 The Beheading of St. John the Baptist, Oratory of Co-Cathedral , 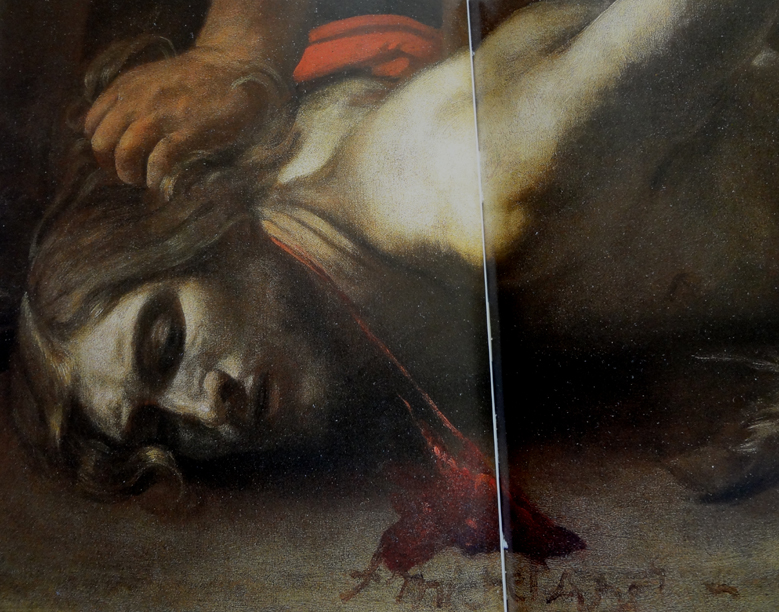 He signed not “Caravaggio”, what he was called after his own town, but “Fr (Brother) Michelangelo“, his Knight of Malta name with crimson and cadmium red gushing from John’s neck.

This painting can tell us more about the tortured psyche of the great painter, brawler, murderer, and fugitive than any other painting. Events in turned out to be a microcosm of his whole life. First he had acceptance, then more than acceptance, acclaim and notoriety. And then it all ended in violence, imprisonment, escape, and fugitive status again.

Caravaggio was so well known and respected that the pope had allowed him to become a knight and it was likely that he would eventually be pardoned for the murder in and could return to the city triumphantly as a knight. They loved his painting of the Baptist and there was to be a festive dedication of it in the Cathedral. Then, again he drew his sword. What went wrong?

He always had a hard time with daily life if he was not painting, what he was born to do. He jumped into the fight involving some knights to protect a friend. He probably thought it was no big deal. He didn’t kill anyone and it wasn’t anything that would not happen on any Saturday night in Campo Marzio in . Caravaggio was arrested along with the other knights. Then he escaped.

The stock, easy answer to the question of why the great painter was always involved with criminal acts of violence, is that he had a predisposition for it and that he became easily insulted. Like a tragic Greek hero his fatal flaw  would bring him down. But did he sense that centuries later his painting in would be studied and written about, that people would travel to see it? In his life time lesser artists continued to get the good commissions while his paintings were rejected?

My eyes tell me that whether he paints executioners or saints, his love for them as human beings shows. This is one of the reasons he is a great artist and his art has universal recognition and appreciation.

In the prison without his sword, his nightmares returned again, the ones about the bounty hunters taking his head for the reward. He could not stay locked up, they would find him. The Beheading of Saint John the Baptist is a painting of his own worst nightmare. It is the most brilliant case of artistic sublimation, turning his dreadful dream into a biblical tale, and being paid to paint it.

After the homicide in in 1606 he went into exile. He kept moving driven by a justifiable paranoia. As they say, if you are paranoid, it does not mean that they are not after you. At the same time he was aided, hidden, protected, and used by Italian aristocratic families that more than ever prized his great painting ability. So, despite his internal turmoil he continued to have patronage and was able to continue to make major important paintings, and his acclaim continued to grow. He was protected first outside of in the Alban Hills, and then in , and in .

In the Grand Master wanted him to become like a court painter. His portrait of the Master is in the Musee de Louvre. The Grand Knight decided to make Caravaggio a Knight so that he could not leave the island. He would become a fugitive artist captive. Grand Master Alof de Wignacourt sent a hypothetical query to Pope Paul V Borghese. What if a man (unnamed) had committed a homicide in in a brawl, could he, possessing special skills and character, still become a Knight of Malta? The pope knew it was Caravaggio and his response was quick and positive, yes. This could be seen as a prelude to his full pardon to be able to return to , which in deed, did come from Pope Paul V in 1610. 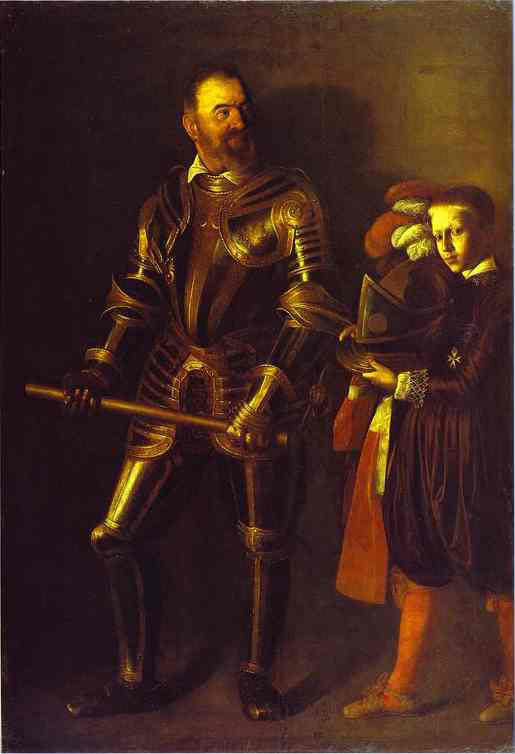 From Caravaggio, Art, Knighthood, and Malta, by Keith Sciberras- “Less than two years after murdering Ranunccio Tomasoni, some eight months after he left Naples, a new chapter in his life was to begin. …the concessions made by Paul V represented a major step towards pardon.” -1.

In front of his painting of The Beheading Saint John the Baptist in the sanctuary of the Oratory of the Cathedral at , the paint not long dry, Caravaggio would be defrocked, de-knighted, in a solemn ceremony, with ritualistic calls of his name four times. They should have known that he was not there, because his offence was not being there. The unforgivable crime was not that he was in a brawl and locked up, but that he had escaped from the inescapable Alcatraz of Malta, the prison , using a rope, and then he fled the city of rock. It has been suggested by historians that he must have had political help in his escape. I am not surprised by any physical or creative feat of this extraordinary man. He did win his sword fights and he was a professional fugitive with excellent powers of observation and his paintings required exceptional physical mastery. 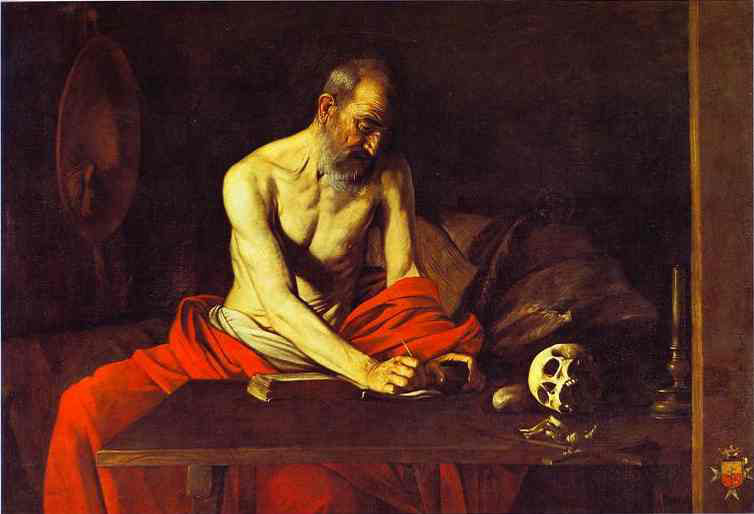 But after his escape…”the Grand Master wanted fugitives back in … and Bellori, (Caravaggio’s biographer), himself records that Caravaggio feared the Knights were after him.” -2 I mention this not to imply that the Knights were responsible for his later death but rather because I am always interested in how Caravaggio thinks.

Many consider The Beheading of Saint John the Baptist to be Caravaggio’s best painting. I think it is The Calling of Saint Matthew, the master’s first great painting and the painting that changed the history of painting and formed a new way to make religious art.

Biographer Helen Langdon says about the Beheading of the Baptist, “It is an ignoble scene. John does not kneel as is customary… but is brought low on the ground and his body is trussed like that of a sacrificial lamb his hands tied behind his back his red cloak suggesting blood and a rope snaking across the floor…
…Its ignobility must have startled young knights who received instruction before it and who aspired to the glorious feats of Christian chivalry yet it is a meditation on the reality of martyrdom…” -3.

Art Historian Howard Hibbard on the signature, “… The signature is proof of Caravaggio’s pride in attaining the honor he had sought so assiduously: its place and its nature are almost pathological and they seem to confirm our suspicions of Caravaggio’s identification with the Baptist and of his unusual preoccupation with beheading.” -4.

The executioner is poised with blade for his final effort in a scene stilled, stopped in time. The Caravaggio red in the burnt umber dungeon is John’s cloak and also becomes the spilled, sacred stain. The bones of the prophet’s face in the dark show John’s character forged by wilderness fasting and show his resolve in martyrdom.

The painter’s defrocking carried the same irreversibility as a beheading, no going back.

He was pardoned to return to but did not make it and died mysteriously in July of four years of exile he made as many enemies through out the as he painted masterpieces. In , before , he was ambushed and attacked, disfigured, and nearly killed.  Was it a fever that caused his death on the beach or was it vengeance or justice that caught up with him at age thirty eight.

He is an artist who knew the highs and lows of life. He painted the Baptist in his low death, in a place familiar to the artist, the lowest darkest cell. The one to come that John announced died upright with arms raised to the sky and breathed his last, giving up freely what was his own, what was not given to Him. Caravaggio painted Saint John the Baptist at his own final baptism, not a baptism by water, a baptism by blood. 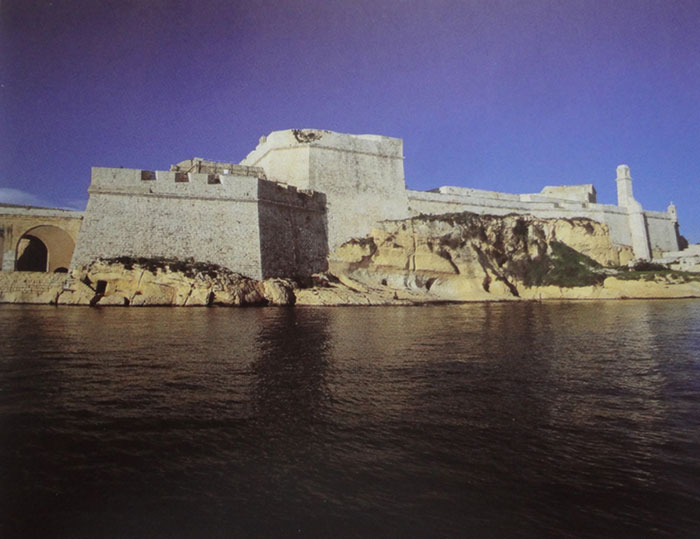