– It is such a sad debacle, the original errors of conception and execution in the first version have been compounded and increased. And it is sad that the sculptor was bullied into making something more absurd and wrong than the first attempt.

In my article of -2011,  http://sullivanart.com/Papa%20Wojtyla%20as%20Capeman.htm   I said, “Pope John Paul II was seen and recognized by more people than any other person in history. For a sculpture of him to not bear his likeness is bizarre like a bad joke.”

The first attempt was a forced application of the Early Modern Sculpture modus operandi, emphasizing the physical qualities of the material and the abstract design, to the detriment of the requirement in portraiture of presenting a likeness. The revision has become a sad experiment in remolding an intractable hard metal. The beauty of bronze as a sculptural medium is that it can replicate faithfully the fluid quality of clay impressed by the sensitive fingers of the sculptor. In this revision the sculptor has carved (grinded with a power tool) the hard bronze making simplified cartoon lines for mouth and chin. Portraiture is first of all, and essentially all about proportion. A likeness in portraiture depends on all the subtleties of proportion being correct. A few cursory lines for a smile don’t cut it.

The essence of a portrait likeness can be seen in the wonderful drawing by Bernini of Cardinal Scipione Borghese. It was made in preparation for the life-size marble bust of the cardinal. The drawing is first generation, direct from life, and it has that immediacy and truth. It captured the vivacious quality of the Cardinal and Gian Lorenzo was able to imbue the marble portrait with that same life.

In Papa Capeman II we have an inadequate attempt at portraiture that is sad because it fails so dramatically in presenting the man who possessed such a commanding physical and spiritual presence. He now looks like a curmudgeon. It was not reasonable to hope that the sculpture could be improved.

There is a story that while Michelangelo was carving his large David in marble, the mayor of offered his opinion that the nose was to big. The sculptor climbed the scaffold, scooped up a handful of marble dust and clanked hammer to chisel without touching the marble while letting the dust fall. The sculptor asked, “Is that better?” The mayor responded, “Yes, much better.”

We wish that the beloved pope looked better. I am a sculptor and I do not wish to attack a fellow artist but I must critique the process. The truth is that the sculptor and the memory of the great pope are the victims of a limited philosophy and aesthetic of art, and the inadequate commissioning process that has botched it twice.

The commissioning body approved a small model by the sculptor. I suspect that the sculptor was chosen for many different reasons, such as his political connections, his overall career, and his past accomplishments. We can be sure that none of his successes involved portraiture and so the process was basically flawed from the beginning. Forcing him to try to redo a ten foot tall ton of bronze was an idea doomed for failure from the start. What were those so called art experts thinking? Even if it were physically plausible to revise the immutable material you can never tinker with and improve what was initially a bad idea. Man with cape? I feel bad for the sculptor that he found himself in this no-win situation.

It would be wise for the individuals on the commissioning body to take a long critical look at how they have perpetuated and prolonged this travesty. Many thousands of people who met Pope John Paul II have said that when he looked at you, you knew that he saw you as if you were the only person in the world. One of his enduring teachings is about the inestimable value of each human individual. To have meaning portraiture must be about the human individual. 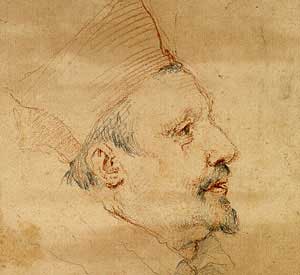