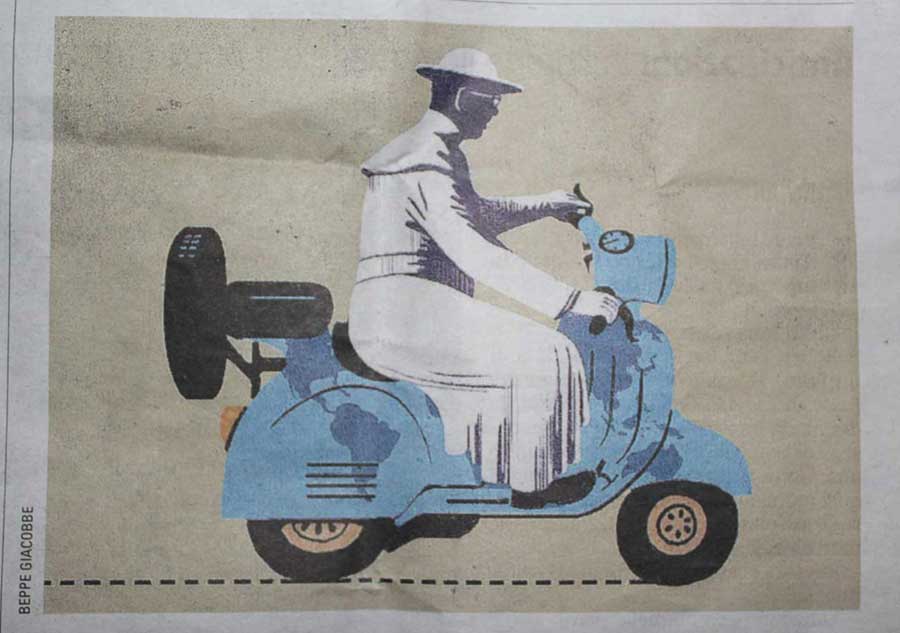 He cares about the poor. But he rejects the Marxist Liberation Theology meta-narrative where “the poor” are a class. He knows and has helped poor people in familial ways as individuals. For Pope Francis the beauty is in the details, the white cassock, the small car, riding the bus, carrying his own luggage.

This Pope is not an ideologue who has a vision for a new world order. It’s the Gospel, the Gospel lived locally. Subsidiarity has been a Catholic theory or organizing principle that says that political and economic matters ought to be handled by the smallest, lowest or least centralized competent authority. The question is, since the encyclical Rerum Novarum of 1891 by Pope Leo XIII, has there yet been an example showing how to live it.

I have a more positive attitude about Postmodernism than some Catholic thinkers today who link it inextricably with Relativism and Deconstruction. And there is the deconstruction of literary criticism that destroys meaning by separating verb and subject.

I was at Rhode Island School of Design in 1989, as the Berlin Wall was coming down, and had the privilege to know a Polish film critic who was teaching a class in “Post Modernism in the Visual Arts”. (As a marble sculptor who also painted, I suffered through Modernism where Clement Greenberg and his Theory of Flatness reigned, Painting and Sculpture must be separated for purity. And “Sculpture was what you backed into when you were trying to get a good distance for viewing an abstract painting.”)

In visual art Postmodernism meant not just a reaction against Modernism but freedom. We could paint our sculpture and the figure returned to painting and sculpture. Derrida’s and the post-structuralist’s philosophy and deconstruction had a superficial influence on Postmodern Architecture in its fragmentation, but Postmodern Architecture’s freedom from the tyranny of Modernist aesthetics was more important. The Modern architects did not care if you knew the building was a church or an apartment building or even if you knew where the door was. They knew better, and they were making great abstract form. Postmodern architecture took some ideas from Route 66 with its shoe store in the shape of a shoe, and meaning became clear, a church could look like a church.

Modernism has always been wedded to the meta narratives. The housing for the poor was for “the poor”, never considered as suitable for or accommodating to individuals. Charles Jencks in his best selling book, The Language of Post-Modern Architecture (1977), 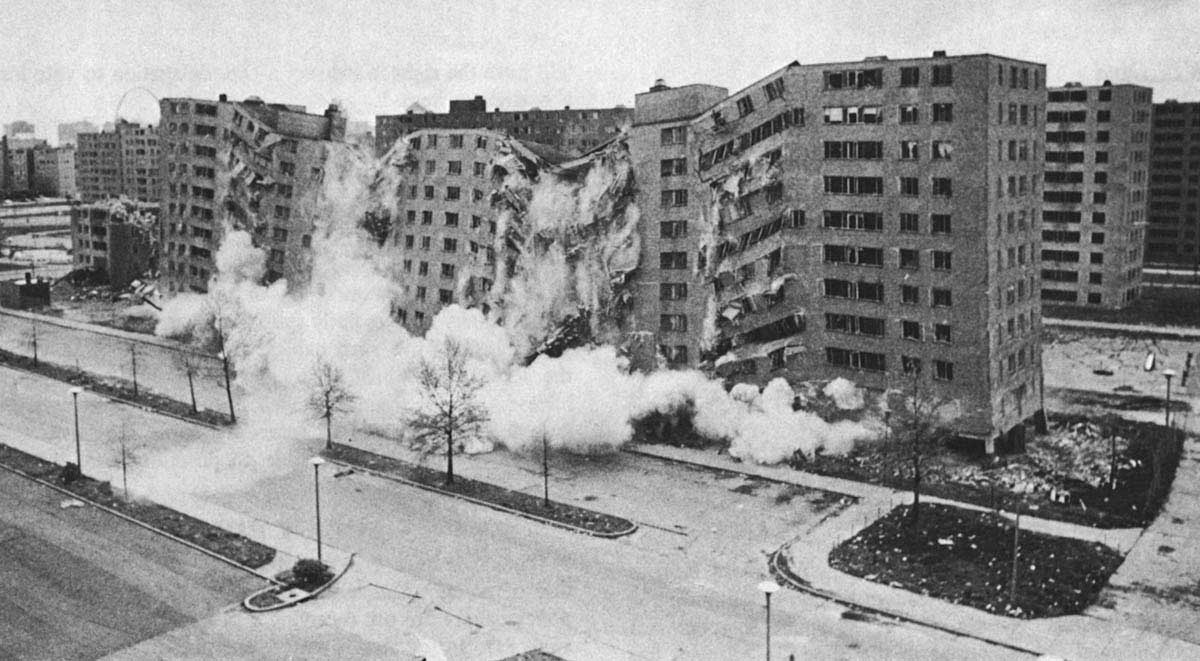 described modernism as dying on , at precisely when the demolition of the Pruitt- Igoe development in St. Louis occurred. The building, a modernist post-war social housing was constructed to provide cheap and affordable housing to ensure equality and fair society communities.

Less than twenty years on the failings of the modern utopian ideal are showcased in this demolition. It became a place of crime and violence. The place had no human scale, there was no privacy, there were no architectural features promoting human dignity. And yet, the architects were arrogant in thinking that they knew what was best.

Postmodernism is suspicious of the promises of technology.

A professor friend, a former Marxist,  wrote after the conclave “Some naive people see it as a victory for left “social justice” tendency because they equate concern for the poor with government programs and redistribution.” They may be disappointed. Look at the localism of the way that Pope Francis lives the Gospel.

The wonderful drawing at the top by Beppe Giacobbe was with the article The Priest Came from The New World to Give Back Faith to Old Europe by Gian Arturo Ferrari in the Sunday edition of the Italian newspaper, Corriere della Sera. (I did not notice at first the subtle world map on the scooter.)

Ferrari emphasizes that Papa Bergoglio is a priest and that he is from the new World. He recalls that Montini (Pope Paul VI), Wojtyla, and Ratzinger were Europeans in culture and in vision of the world from the war and cold war years. He says on the other hand, Bergoglio has simplicity, honesty, and humility, and he is a Jesuit like the ones who converted the Indians in the . is in decline, not only religiously, but also geopolitically. It is bleary eyed and no longer has the clarity of vision that was once its glory. And pessimism is the work of the devil.

He ends by proposing that there is a message of hope for and . Pope Francis will “have a great gift for everyone, whether believers or not.”