ART OF THE BLESSED VIRGIN

I was startled by the morning light on my painting of The Three Crosses, capturing the moment in a photograph. It was taken on the Feast of the Immaculate Conception and the low winter sun was reflected, refracted, into colors of the spectrum, by the beveled edge of a mirror on the opposite wall of the studio. It descended from the cross glowing and gently settled on the neck of the Blessed Mother, held up, still standing, Stabat Mater, in the light of grace from the cross of her son. 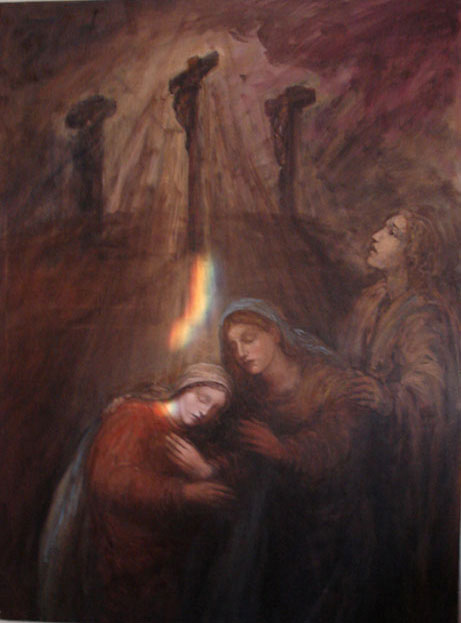 It seems there is always an interesting story connected to my works about the Blessed Virgin Mary. I would like to reveal the drama behind some of them.

I realize now that assuming a counter cultural position was the only thing for me to do, as a Catholic artist, through out the reigns of  Pop Art, Op Art, Minimalism, more isms, political Performance Art, and dirt on gallery floors  called Sculpture. I had been teaching at the Graduate School of Design at Harvard but had not finished my undergraduate degree, so I returned to Rhode Island School of Design, at the same time, in the nineties, to finish and then go on to graduate work.  The dominant ideology in university art departments at that time was Feminist Marxism. A art critic teacher told me that as a white male I should stop making art, we have enough of that kind of art The students were being taught only to invent the most shocking next thing to gain attention in the insular art world. They were not being taught to draw.

Inspiration has come largely from my family. Our children were not home schooled but my wife was a stay at home Mom who published mystery novels about a nun, and I was a part time stay at home Dad with separate studios as well as a studio in the house. My wife and my eight children were willing models and my graduate exhibition was a large room full of hundreds of paintings and drawings of my children. There was the drawing done in the delivery room, on a scrap of paper, five minutes after Mary was born, her first portrait. There was Joe in a cowboy hat, Rachel in a ballet pose, Kathleen holding her brother, John trying to eat a tube of my water color paint, Eddy writing music in his head, and Christian, who could fake crying, with a tear on his cheek.

I was approached by a man in 1998 who was a secret follower of a woman in who had visions of The Blessed Virgin Mary for about ten years, always on the 13th of the month, connected with . The apparitions have not been approved by the Church. The Church has collected information and will make her correct decision as she does, in due time, about the authenticity and orthodoxy of the apparitions.

I was commissioned to make an eleven foot marble sculpture of Nancy Fowler’s vision, a Madonna and Child. It was to be called Our Loving Mother. The man and Nancy met with a police sketch artist for a very long day. just kept saying, no, her face is softer. In many ways she is like a child. The sketch artist did not get anything. They gave up. This was in April. They said that a hundred thousand pilgrims would come in October, including forty bus loads from , for the last public apparition on the thirteenth. I said I could do it but because there was so little time it would have to be done in where the marble comes from. To me “Her face is softer.” meant a fine polish on Carrara Marble. I began carving the eight ton block in on May 19th.

Nancy and eighteen Americans on a bus were coming from and going to Marian shrines all over , including Loreto, and then they would come to the studio in Pietrasanta, in , on August 1st. A week before that, I crashed a motorcycle.  I saw the x-rays indicating that three ribs were broken. A very young doctor in the Emergency Room told me to take some time off from work, he handed me my x-rays and said goodbye even though I told him in English and in Italian that I could not breathe. I stayed up that night and went to the studio the next day.

The only carving left to finish was the face of the Blessed Virgin. I intended to carve it from below, because that is where it would be seen from, and I would not use power tools, only hand tools, because this was the most important part of the sculpture. With wine and aspirin I carved all week. The sculpture was shipped on August 11th and made it to on October 7th.

When I returned to in August, a week after finishing the carving, my daughter, Rachel, an Emergency Room doctor, saw the broken ribs on the x-ray right away but was aghast at the collapsed lung that she also saw. Rachel said, “Why didn’t you die? Tell me exactly what you did.” She concluded that I had re-inflated the lung myself by carving with arms over my head and that I might have died had I gone to bed that first night.

The pose for the sculpture was dictated by a small devotional statue that Nancy Fowler prayed in front of. The pose of the infant in a fetal position protected by his mother is especially relevant for the abortion culture in today. 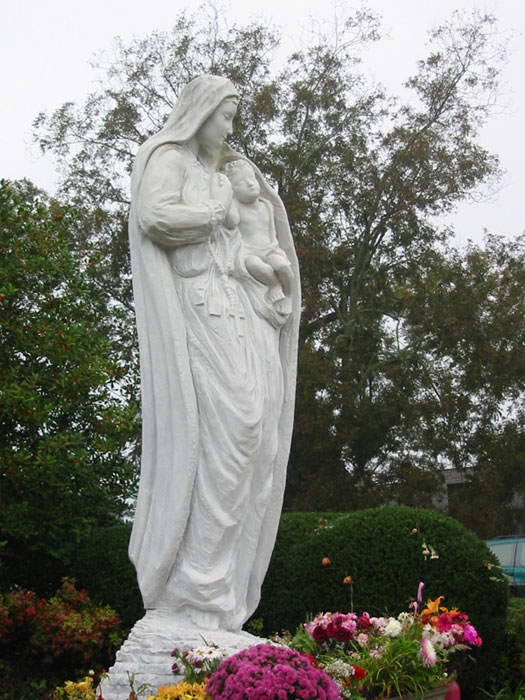 A small marble Pieta was one of the first marbles that I carved with a complex pose and attention to detail. It was stolen from a moving van in . I always had the feeling, although unreasonable, that I would get it back. There was a notice of a reward on my website. Back in in 2003 there was an article in The Boston Globe Newspaper about a celebrity auction of my art that raised a considerable amount of money for cancer research. I received a call from a man who claimed to be an antique dealer who said he had the sculpture.  For some reason he did not want to meet me for the exchange of sculpture for reward. He hung up. I dialed *57 and traced the call. Ten years after the theft, the police were able to negotiate the return of the Pieta. The caller was the thief. 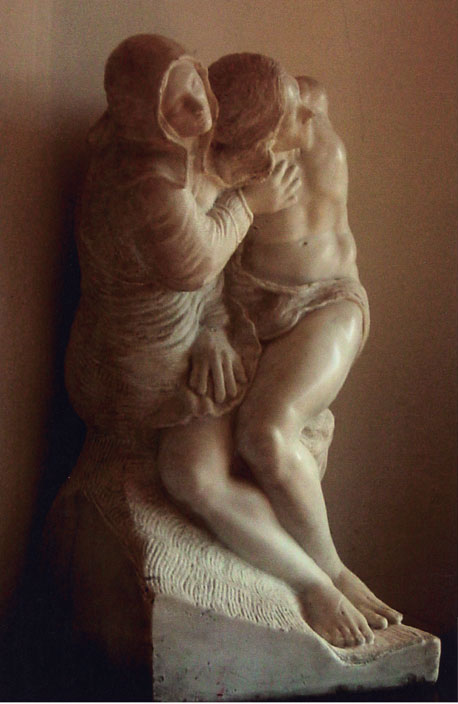 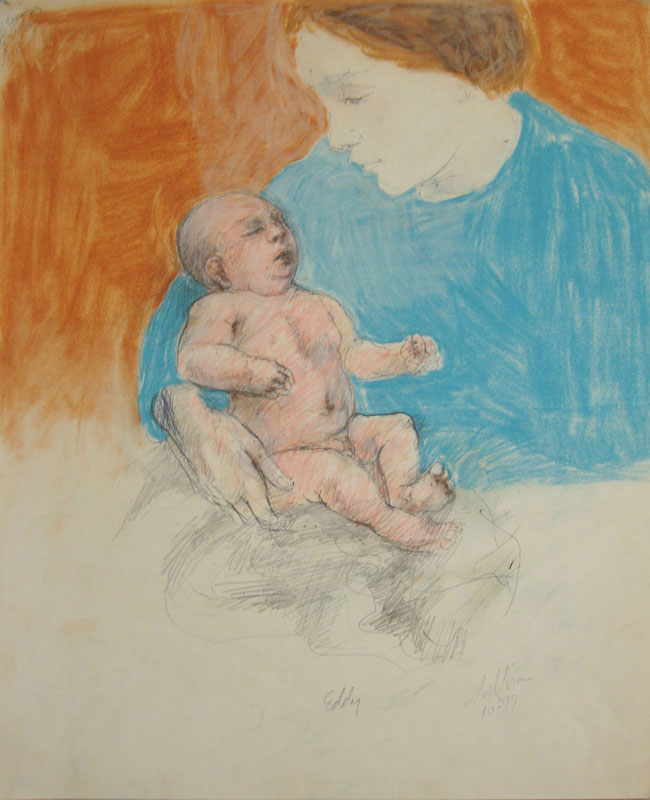 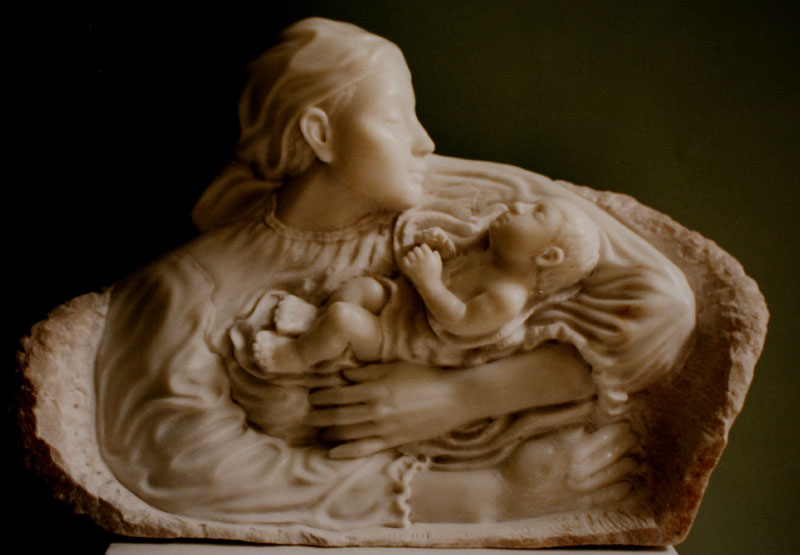 Madonna and Child, (Winona and Christian), marble, life size, Our Lady of the , 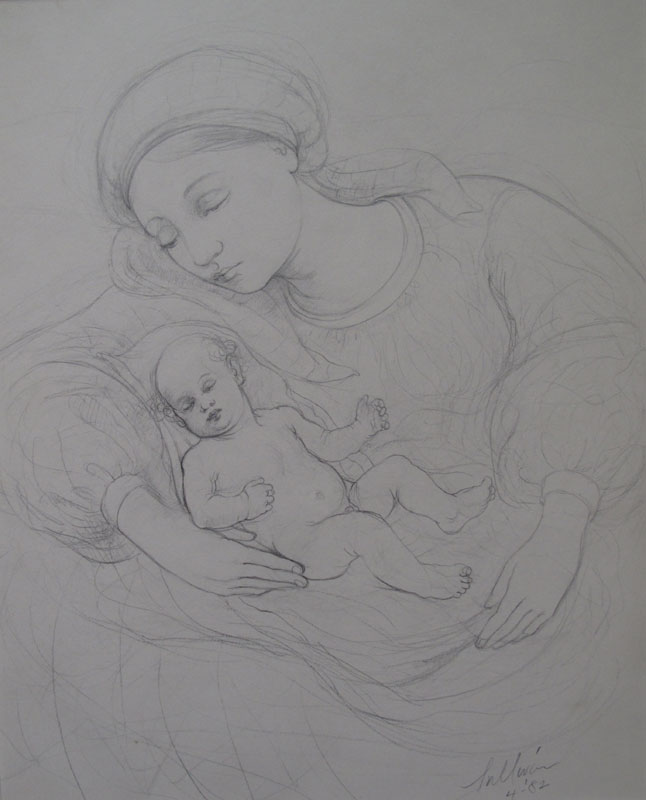 In 2006 I carved another Pieta and kept a photographic and narrative log of the process. It took sixty seven days. On day thirty seven a large hole appeared in the forehead of the Blessed Virgin. I felt betrayed by the marble because I had been a diligent worker. There was nothing to do but keep carving.  I had to change the pose. The top of her head had to go into the block where there was sufficient marble. The tilt of her head showed her emotion. The hole, although at the time I didn’t know, (and didn’t like what was happening), enabled me to make a composition that made more sense and carried more pathos. I kept the shape of the boulder, because it spoke of the cave quarry in the mountain where the special marble was found, it showed the process of uncovering form, and it alluded to the rock hewn tomb. 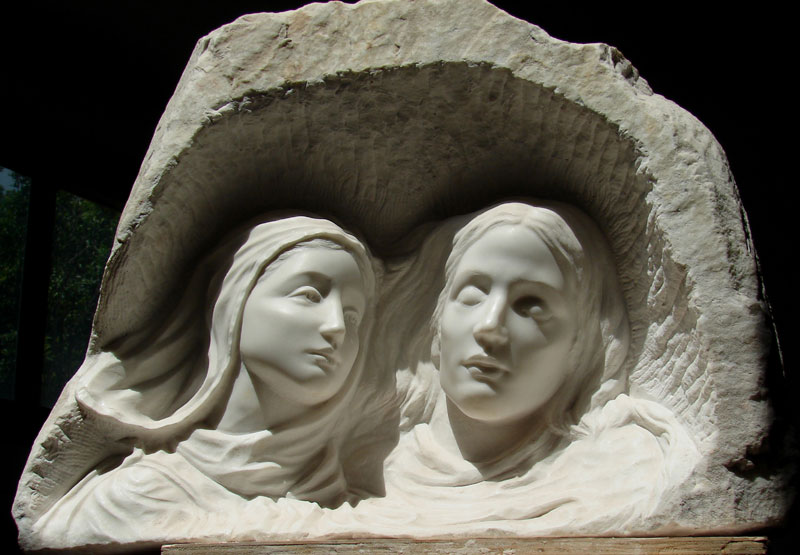 Pope Benedict on the Pieta concept : “The languages into which the Gospel entered when it came to the pagan world did not have such modes of expression. But the image of the pieta, the Mother grieving for her son, became the vivid translation of this word. In her, God’s maternal affliction is open to view. In her we can behold it and touch it. She is the compasio of God, displayed in a human being who has let herself be drawn wholly into God’s mystery”. Cardnal Joseph Ratzinger, .-Mary, 1997, page 78.