My Pieta is unique because of the innovation of the pose, because of using the block as part of the sculpture, and because of the special treatment of the marble. I say this not to establish myself as a Modernist, concerned only about the tyranny of  “the new”, but because these factors situate the work historically and explain some of its formal characteristics.

I can think of no sculptures where Mary is looking at her dead son in this most direct way. There are Renaissance paintings that have a similar sentiment, if not the exact pose. My early Pieta takes its inspiration from Michelangelo’s late Pieta, the Pieta Rondanini, on the right, the piece that he was working on six days before he died, at age almost eighty nine. Of particular significance are the two heads in the same direction expressing the emotional bond and also the verticality of the overall orientation of both sculptures.

I have preserved the boulder and made the emergence of the figures out of the block a part of the meaning and content of the sculpture. Hence, it has aspects of an Entombment, a Lamentation, and A Deposition. 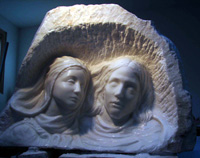 Michelangelo’s unfinished carvings retain the strong presence of the block and speak directly about the carving process.

The Young Captive and Atlas Captive respectively,  from the Academia in Florence reveal the masters carving technique of uncovering the figure within the block.

Rodin understood what Michelangelo had done with the relationship of figure to block although he himself was not a carver but rather a modeler in clay. 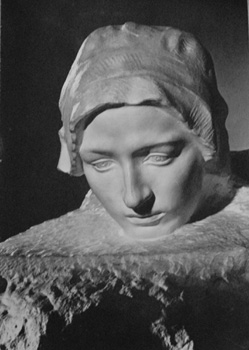 This portrait, Thought, of his pupil and lover, Camile Claudel, sits on a large square marble block. 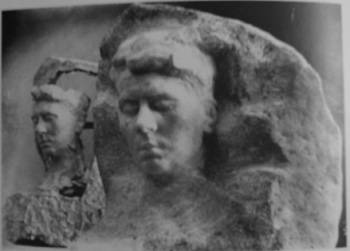 This photograph of a portrait of the other woman in Rodin’s life, Rose Beret, shows how in the background Rodin has supplied a plaster cast of the original clay portrait with a piece of wood fastened to show the overall shape of the marble block that he desired. In the foreground is the marble being carved by an artisan, an expert copyist. Although Rodin has understood the power of Michelangelo’s work he has turned the process around and has made it an artificial process suited to the demands of his successful sculpture factory. Rodin made clay sculptures that were then copied in marble by artisans. He signed the marbles.

Another sculptor who has understood the essence of Michelangelo’s sculpting method is Constantin Brancusi. The face emerges from the rough stone in the extraordinary Sleeping Muse from 1906. 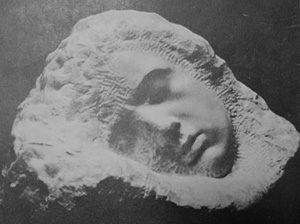 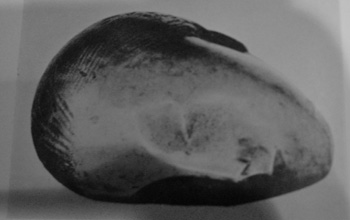 Then in 1909 Brancusi did another Sleeping Muse, on the right, ugh, this time in bronze. He then continued to make pure geometric forms in stone and in bronze and eventually he become a highly acclaimed Modern sculptor. He left his dreams of a figurative Modernism and became the slave of the quest for perfect shape and hence the darling of all who love the theory of art more than the art. He never again reached the brilliance of carving shown in the first marble muse.

The Italian sculptor, Medardo Rosso, also in Paris with Rodin and Brancusi in 1906, made his most well known work, Ecce Puer. He put wax over plaster producing a special surface. Apparently he influenced Rodin toward an impressionism (small i) in sculpture. 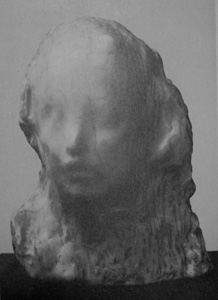 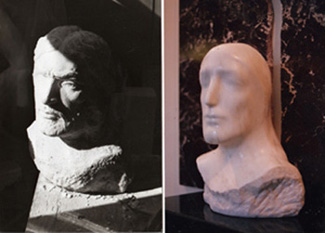 My Risen Christ , on the right, commissioned for Saint Zepherin’s Church in Wayland, Massachusetts, has a  surface that was achieved by polishing the marble right over details to make flowing forms. These photographs show the before and after. It is surprising how many letters I have received saying how right his features are, even though they are not at all specific. Over the years I have evolved a technique of carving marble that is purely my own. I am free from trying to make marble look like cloth or any other material in a super realistic manner.  I  try to utilize the special reflective and refractive qualities of marble. The right finish for this new Pieta is still evolving.