My Interview with Saint Peter, the Art of Martyrdom

“Yes, Caravaggio said I could speak with him again. I brought a copy of the portrait of you by Rembrandt for your mother. You said she liked the Caravaggio painting of you. Rembrandt catches a good likeness, don’t you think?”

“Saint Peter, can I ask you a few questions while I’m here about the Caravaggio painting of you being crucified upside down? What is the look on your face? It’s not fear.” 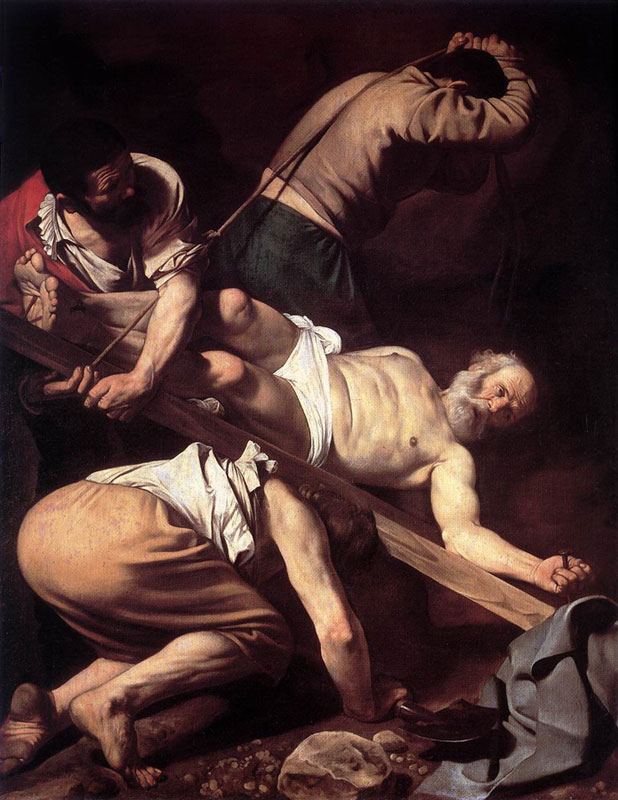 “You want an interview with me?”

He went on, “The problem with an interview is that whatever I say in response to you must be in a form that you can comprehend. Did you study theology? Heaven is a place, you can see that, it’s also a state, being in the presence of God. I can only, with great difficulty, pretend to not be living in that presence. To speak with you, I must imagine that I am the old me, bumbling around on earth. It feels ingenuous to do so, but it’s the only way that we can connect since you are neither here nor there.”

“That’s fine, I see, but I don’t fully understand what I’m seeing. I feel like Alice or Gulliver, not at all like Dante, would that I had a guide like Virgil.”

“Alright, there is some truth in the Caravaggio painting of my crucifixion. The time for fear had passed. I was jailed and freed many times. You know of my chains in the church named for them in Rome, San Pietro in Vincoli, Saint Peter in Chains, now the resting place for Michelangelo’s Moses and the tomb of Pope Julius II.” He continued, “The term ‘martyr’ envelopes choice. Do you know the story of ‘Quo Vadis’?”

“I know of the church by that name on the Appia Antica in Rome. I think there was a Hollywood epic movie by that name too, from the fifties. Peter Ustinov played Nero.” 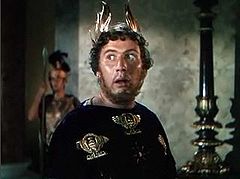 He said, “In Technicolor, and I was played by a Scottish actor with an agreeable accent. He made me look like Moses, tall, dresseed all in white, with flowing white hair and beard. ‘Quo vadis’ was what I questioned when I saw a vision of the Lord on the road. I was fleeing the city. I said ‘Where are you going?’ He said he was going into the city to be crucified again. I knew then that I had to turn around.”

I said, “I have noticed that in the art about martyrdom that Rome is full of, that the martyr willingly grasps the palm branch, the symbol of that fate. And they are often shown experiencing a transcendent vision.”

Saint Peter said, “Yes. There are only two possibilities of why anyone would choose a violent death, seeing a vision of what lies beyond that reality, or, the alternative is that the person is insane.”

“The worst thing about being crucified upside down is that the blood rushes to your head. Sorry, we do martyrdom jokes here all the time.”

I knew of one such. “Didn’t Saint Lawrence say on his grille, as he was being roasted, something like, turn me over, I’m done on this side? Is that true?”

“You would have to ask him yourself.” 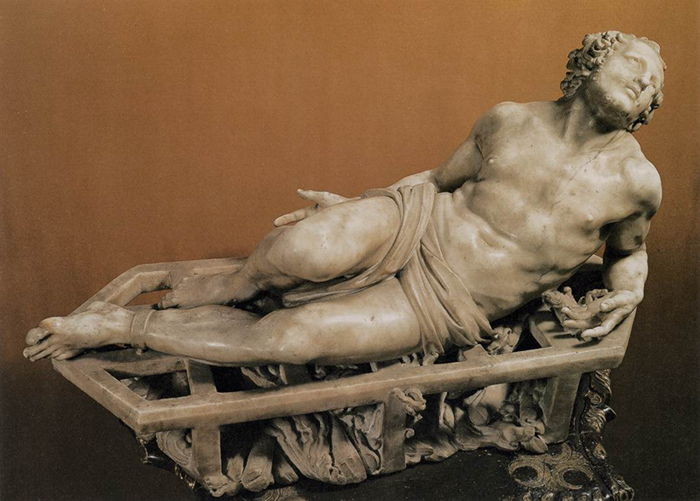 “Yes, and he carved flames in marble.”

On this visit I was able to look around a little. I realize now that my old idea of where I would see Saint Peter was an impoverished vision. I imagined a barren expanse of blue and a cloud, a gate, a sense of being precariously high up, and a lonely silence. It wasn’t like that at all. It was more like a city with many people doing many different things. Many were doing things together or were talking in groups. There was music, I could only hear it if I thought about it. Saint Peter was very close to me and yet I was aware of many things happening around us. I think some of those that I saw may have been angels. I say this because of the way they walked. I felt like I did as a boy. My parents loved me and I knew it. They told me that people were good and the world made sense. I sensed beauty everywhere.

I said, “San Pietro, I see art everywhere, is that just me?”

He said, “You think your own predilections cause you to perceive things that way? What you see is an environment of order. Not like the order of nature that you are familiar with, that as Paul has said, still groans for perfection. I think the analogy with art is apt, I like it.”

He continued, “So to conclude about martyrdom. Do you know that all but two, of the fifty two of my immediate successors as Bishop of Rome are saints, most were martyrs?” 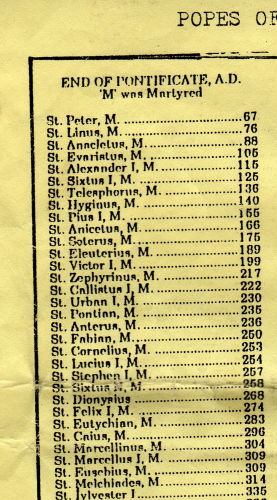 Saint Peter said, “Yes, he never shied away from telling graphic tales. Losing one’s head, being pierced, or cooked, is not for everyone. There was a time when we had to think about it. We had to be prepared. You had to give it all. It was a big distinguished club to join. There were some seriously impressive witnesses. The Greek word for witness means martyr. You wanted to be like them, and then most of all was the master’s example, so fresh in our minds. You know it happened so fast. It seemed right for me given the position that I had. What else could I do, get another fishing boat?”

Then he went on, “As far as the wealth of art all over Christendom, especially in Rome, there are more works about miracles than there are about deaths.”

I said, “Yes, the longer I stay in Rome the more I find that there is art about a miracle on every street.”

“How true, that’s Rome, do come back and see me again.”