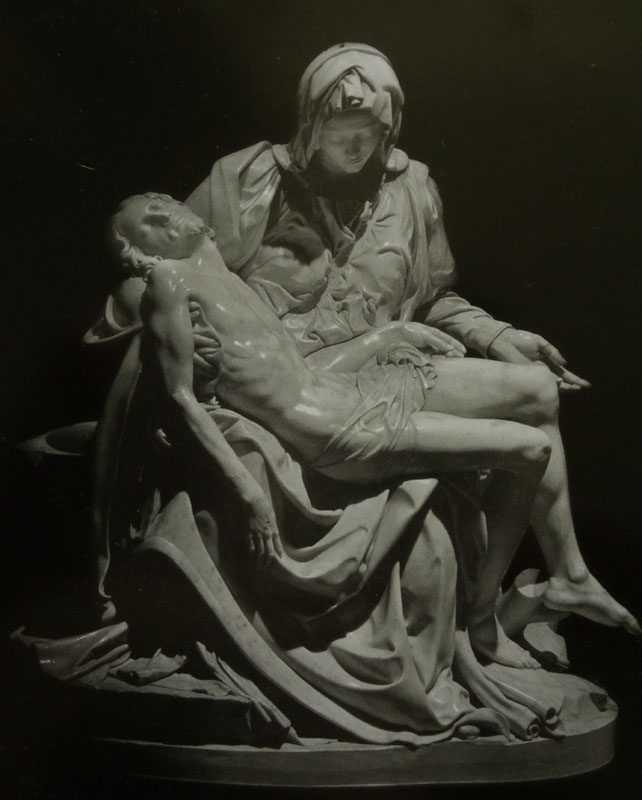 There is one place on earth where you can be within a few steps of the ultimate masterpieces in sculpture, painting, and architecture done by the same artist. You would be standing under the dome of Peters Basilica in close to a marble Pieta and adjacent to the Sistine Chapel fresco paintings. Michelangelo Buonarroti achieved unequaled excellence in all three mediums.

He signed his letters “Michelangelo, Sculptor”. His way of seeing and uncovering form in a Neo Platonic way in a block of marble enabled him to paint figures that are three dimensional and to design architecture that commands space. He spent most of his life in but considered himself a Florentine. After his death his Florentine followers were able to sneak his body out of so that he could be buried at home. His tomb is in the neighborhood church of his youth, Santa Croce.

The young sculptor came to inauspiciously with the proceeds from the sale of a marble cupid that he carved, aged by burying, and then passed off as an antique. It was bought by Cardinal Riario. The cardinal did not like being duped but nevertheless provided the young sculptor with a large weathered block of marble. The young man carved a larger than life size Bacchus. In a very short time the sculpture that Michelangelo did in rivaled the great works from antiquity.

Art Historian William Wallace names four Michelangelo works as cultural icons; The Rome Pieta, the Sistine Fresco Paintings, Moses, and David. The David is in , the others are in . Michelangelo has architecture all around the city. The Moses sculpture is part of the tomb of Pope Julius II at the in Chains near the Coliseum. His Risen Christ marble is in the by the Parthenon. All are accessible, only the Sistine Chapel requires an admission fee. We can look more closely at the three works at the . 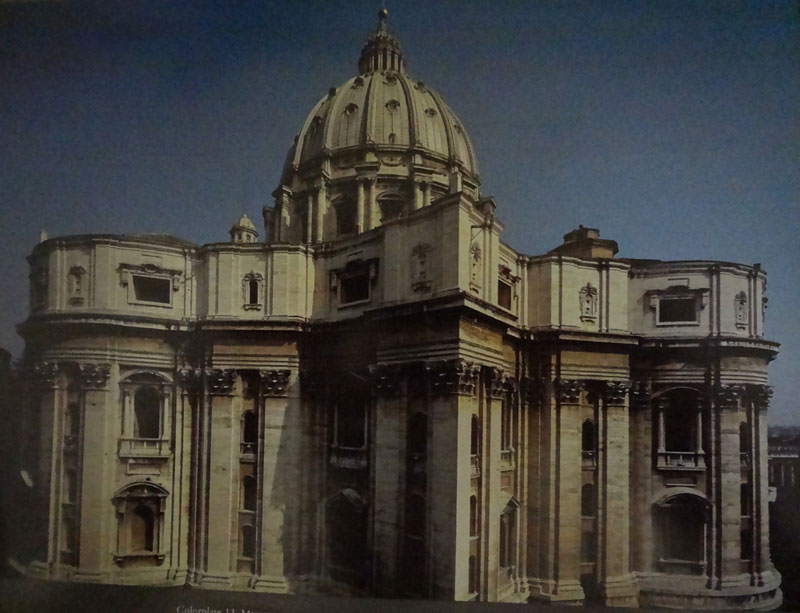 Michelangelo’s dome is the grandchild of the Pantheon dome in Rome. The Renaissance began in 1402 with the competition for the sculpture for the bronze doors of the Baptistry in . Lorenzo Ghiberti bested Fillipo Bruneleschi for the commission which he would work on for the rest of his life. Michelangelo called the doors “The Gates of Paradise”. Disappointed, Bruneleschi left the city and went to . He studied the Pantheon and understood how the great dome was built. That knowledge had not been passed down, it was lost, and needed to be rediscovered by intense looking.  Back in , the confidence of the Renaissance impelled the citizens to build the largest church in the world. They began to build the Duomo, Santa Maria del Fiore, even though they did not know how to build a dome to cap it. The plan was to build the dome over a dirt support and then take the dirt out in wheelbarrows. They would find a way to do it.

Brunelecschi returned and said, never mind the dirt, “I think I know how to do it.” He did. Michelangelo said that he was privileged to grow up under the shadow of the magnificent dome. His dome for was based upon Bruneleschi’s dome.

As an old man he volunteered to be the architect for Saint Peters Basilica for “the glory of God”, serving without pay until his death. He saw the drum for the dome before he died but not the dome itself. He took away fussy crenellations from previous architects and clarified and kept Bramante’s Greek cross design. The central pilasters became massive supports for the great dome.

This photograph shows the dome from the back and it also shows the muscularity of Michelangelo’s architecture. I call attention to it because he was a sculptor of muscular bodies first and foremost and that informed his work in all mediums.  After his death the basilica became a Latin cross design with the long nave to accommodate more pilgrims. Some lament the fact that, as you approach the church, the dome is obscured by the massive façade. From any where else in the city, the dome dominates the skyline.

There is no need for me to describe the fresco paintings because they are so well known. I can repeat what I have often told my students. The sculptor did not want to do the commission. There was some intrigue. Bramante, the architect for the basilica at the time, had the ear of Pope Julius. He said get Michelangelo to do the ceiling of that chapel, that odd shaped impossible space, (so that my home town boy, Raphael, can have the good job painting in your palace). To get out of the bad job the sculptor claimed to not know fresco. The shrewd pope said, oh no, we know you apprenticed with Gerlandaio in , climb that scaffolding.

Michelangelo began painting the twelve apostles. It was not going well. The good thing was he could be out of there in six months.  But he could not do something not worthy of his great gifts. He destroyed what was done and ran off to the marble quarries in the mountains of to think. He came back and told Julius that he would paint all of Genesis on the ceiling. Many years later it ended up being more than three hundred figures, figures painted as never before. It remains a case of making something good out of a bad job. We and history are the beneficiaries. If the sculptor had his way there would have been a few more marble figures.

Michelangelo was twenty five when he finished carving his Pieta. The Sistine frescoes were from his middle years. Four years for the ceiling, and then many popes later he did the Last Judgement.

The Pieta is something good from a good job. The contract for the young man with the French Cardinal guarantied that it would be the best marble in . It still is. The photograph above shows what it may have looked like in the French chapel at the back of the old basilica. It would have been on a low base. The subject was the dead Christ. The sculptor was able to do what he wanted to do, carve a perfect nude male figure.  Elevated as it is now, above eyelevel, the subject has become more about the face of the Virgin.  Pope Benedict on the Pieta concept: “The languages into which the Gospel entered when it came to the pagan world did not have such modes of expression. But the image of the pieta, the Mother grieving for her son, became the vivid translation of this word. In her, God’s maternal affliction is open to view. In her we can behold it and touch it. She is the compasio of God, displayed in a human being who has let herself be drawn wholly into God’s mystery”.-Mary, 1997, page 78.

Low or high the sculpture is good from any angle and people still gasp when they first see it, even from far away behind bullet proof glass. 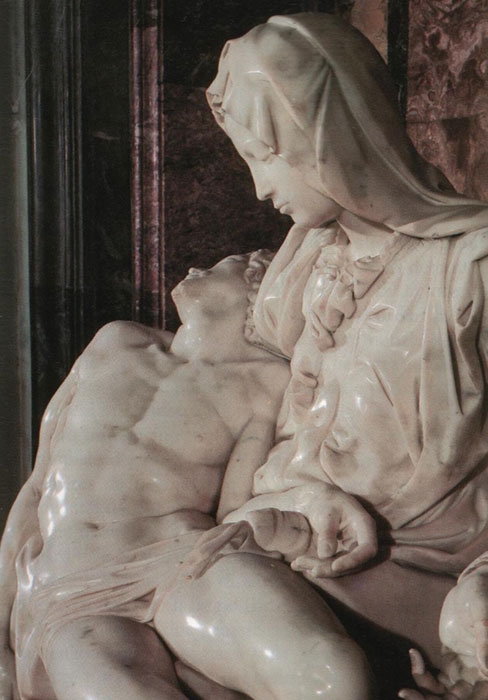