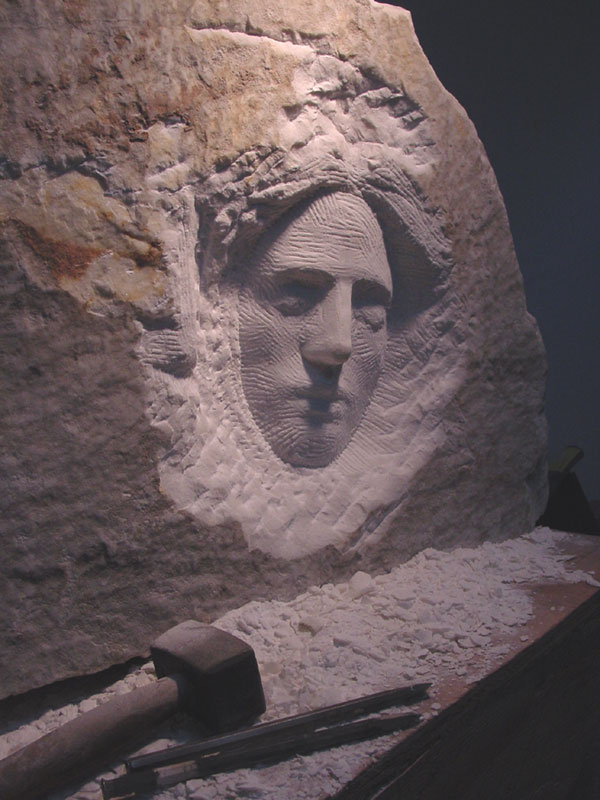 There is real depth beginning here and I have found where the Virgin’s nose is although it will eventually be deeper in the block. The marble is awesome. You can see how sharp the chips are, it is hard, and it is glass like and not granular or “sugary”.

The two essential ideas that I have learned in carving directly in marble are, first, find and define high points, and secondly, peel back layers of stone, prematurely finishing some areas to aid vision of what is in the stone. These methods are also those of Michelangelo and can be seen clearly in his unfinished carvings. I learned on my own by trial and error, not having a teacher, as can be seen in my second or third carving, the Egg Head Muse. The piece was a boulder found on the side of the road near the marble quarry in West Rutland, Vermont. It’s general shape has not changed. I carved a face on the egg shaped boulder. It remained for a month or so, all the while as I looked at the work I had the feeling that inside, under this first face, was another more refined face. This was later revealed by the peeling back process. Indeed there was a face inside of this egg. 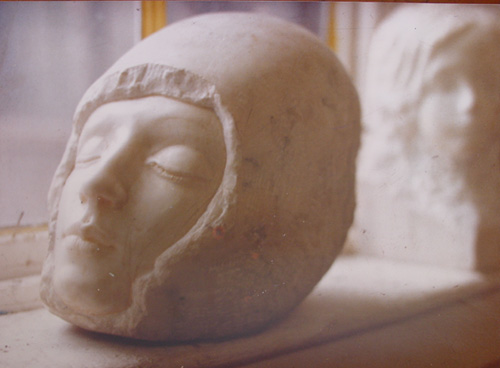 One must recall the well known Michelangelo Sonnet #151 ,

Not even the best of artist has any conception

that a single marble block does not contain

within its excess, and that is only attained

by hand that obeys the intellect

Later, I would study and understand Michelangelo’s carving practice. The book that I am writing,  Michelangelo Marbles, gives my discoveries looking over the master’s shoulder as he carves. Many of the ideas expressed here are in the book.