The Annunciation painting is typical of the way that Caravaggio orchestrates light. For him the light is in the service of the narrative. He will not give us the face of that angel. There is something else more important, the transcendent story. The light begins on the angel’s back, shoulder, and arm, and then leads to the Virgin. He is in complete control of the formal elements of the painting and he never feels restricted by conventional thinking, as in feeling obliged to describe the face of the angel. Neither was his life restricted by conventional thinking.

Caravaggio, the choreographer of figures, uses the light to pull the viewer’s eye around the canvas at will. To brand him only a realist painter is to ignore his great and original compositional gifts. He is much less a slave to scientific optics than you would imagine. He invents and decides where he wants the light to be. He is the director with tight control, he is the swordfighter who paints not with temerity, but with slashing force.

These three painters are celebrated for their realism because they make us believe what they paint. In our post-photographic, scientifically ascendant world many “I know how they did it” fools can only grasp a technological explanation about the paintings, so they, without studying the art, theorize that Caravaggio and Vermeer used the camera obscura. These artists did not use that crude tool. How could it tell Caravaggio how to paint clouds or how to paint a mystery. Could a mechanical device tell Vermeer how to paint light that is saturated with peace?

There are no accusations of Rembrandt using a camera obscura because he did thousands of drawings and etchings that tell of his preparations for paintings.

Every artist after Caravaggio knew about him and what he had done. Even though he was in disfavor for a time his influence was unleashed and could not be ignored.

The followers of Caravaggio, the Caravaggisti, were many. They insured his renown and dispersed his influence. They ranged from the celebrated Roman, Guido Reni, a suave great painter who, using the light that Caravaggio invented, replaced him as Rome’s star artist. There were other Romans, like Orazio Genteleschi, and his acclaimed painter daughter, Artemisia. In an age with few female painters, Artemesia stands out as a major artist and one who painted particularly feminist themes, subjects having autobiographical origins. Artemesia became known because of the very public rape trial when she accused one of her father’s students. It ended with everyone being friends and getting along and it seemed like a charade. (Don’t rush out to see the movie “Atemesia”, it could have been so good given the raw material; art, rape, Baroque Rome, but it wasn’t.) There are too many other Italian followers of Caravaggio to mention. Then the influence reached to France and Georges de La Tour and then to the Dutch genre artists.

Caravaggio and Rembrandt progressed from genre to history painting as their careers ripened. Vermeer remained a genre artist although some of his works often have a secondary allegorical content. It is always risky to be narrow in characterizing Rembrandt, because he defies limitations because of the breath of his art.

Rembrandt’s light is not as dispersed as Caravaggio’s. Rembrandt’s compositions are tight and usually have a central focus. He collected jewels and armor and funny hats. He loved to paint the light on gleaming objects. His light is warm and deep. His shadows are not flat, there is always the sense of defined form even in the darkest passages. He loved light on cloth, feathers, wood, hair, and flesh. Because he was the greatest portrait painter the light is always at work revealing human character. Art historian Kenneth Clark on Rembrandt, “…apart from his immense gifts as a pure painter and illustrator, he digs down to the roots of life; and he opens his heart to us. We have the feeling that he is keeping nothing back.” 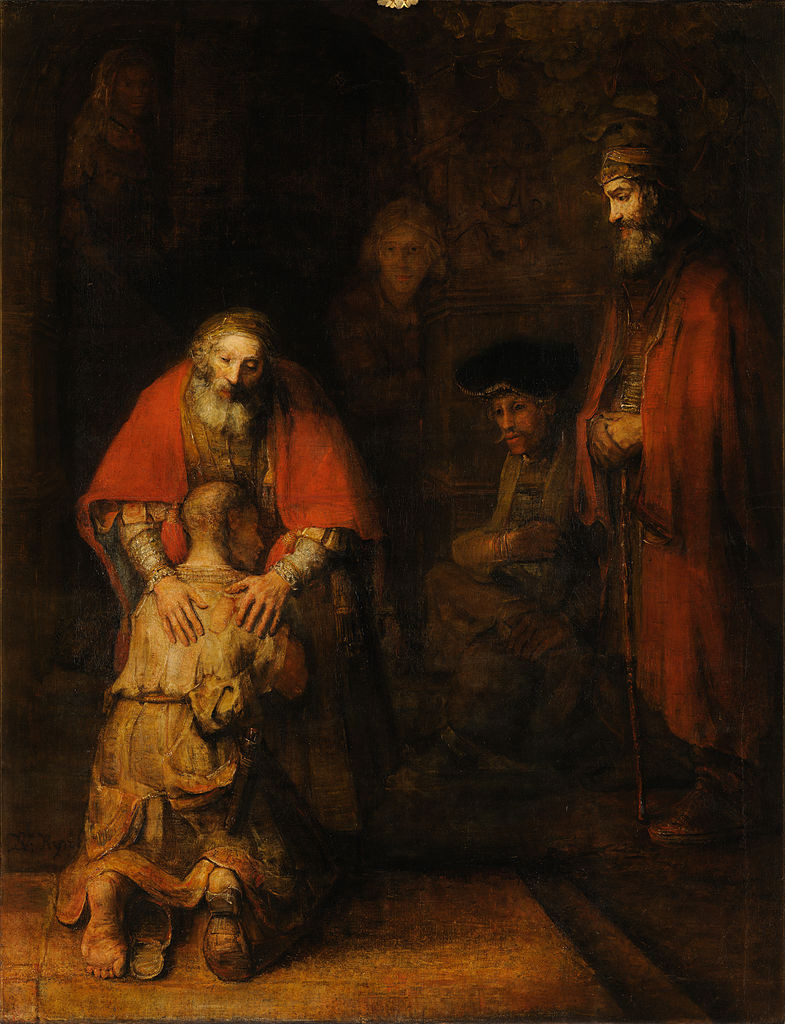 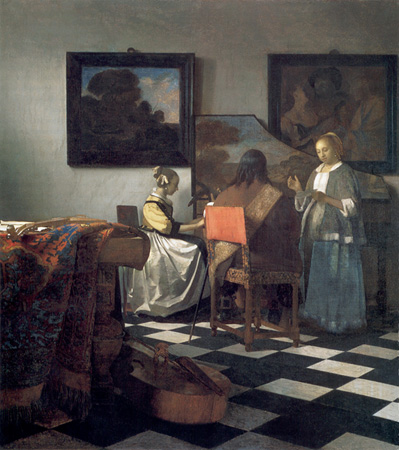 Vermeer’s light often comes from the high up window on the left of his house in Delft. Then it ripples across a map or a painting in the back and may fade in intensity on the back wall from left to right. The light hits the main figures or figure centrally located in the two dimensional composition. The horizon line leads to the action. Floor tiles precisely define the space. In the muted grey scale periphery there will be, barely visible on the floor, a cello or a piece of furniture.

You could write a book about the red chair back that is a rectangle in space in the middle of The Concert. Don’t tag these painters as realists. They are much more than that. They do not just copy the way things look, they create amazingly complex visual puzzles that fit together so well that we do not question their veracity and they leave us with a memory of a beautiful invented world. Art is an invention.

Caravaggio used light to tell the story. For Rembrandt and Vermeer the subject of the painting became the light. They acknowledge a tremendous debt to the daring Caravaggio who preceded them.