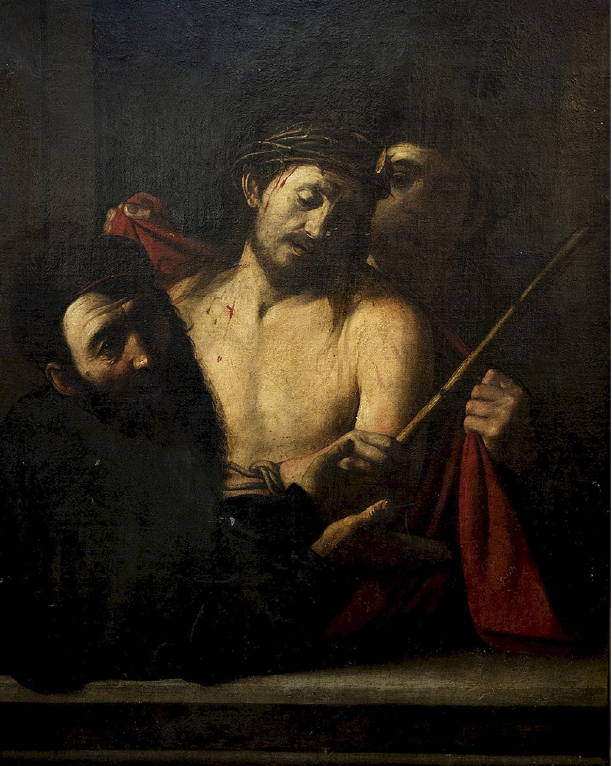 The painting was initially assigned to the circle of Jusepe de Ribera and would go to an auction in Madrid at Ansorena, with a base of only 1,500 euros. But it was withdrawn from sale, blocked by the Spanish state, while interest in the painting grew and the suspicion arose that it may be an unpublished work by Michelangelo Merisi.

It is a Caravaggio, and he is in it. Behind Christ is his self-portrait. The portrait of Jesus may even be Caravaggio’s best incarnation in paint of him. In the painting of the skin of Christ paint becomes flesh as only Caravaggio can create it. That fact, and the master’s unmistakable spare yet dramatic composition separates this painting from all his many followers. His almost hidden in the dark self-portrait has the same quizzical look that his late self-portraits have. The tenebroso shows that he, in a hands-on way, again takes an active role in the drama holding the crimson drape.

It is about the skin. Of the Spaniards Francisco de Zurbaran has creamy paint and presents still life lusciousness like Caravaggio but mostly in his drapery more than in his flesh. In Ecce Homo Caravaggio went beyond the cream consistency of paint and created a surface that has a hard patina of almost shiny stressed flesh. There is an exactness of surface truth that one would find in anatomy portrayed in a figurative marble sculpture. This is extraordinary given the fact that the realist painter eschewed the practice of drawing from sculptures or casts in favor of painting directly from live models. The painting of the flesh of Christ and the Caravaggio composition, leave no doubt that he painted Ecce Homo. We must note the brilliance of the portrait of Jesus. Better than his competitors and followers. As good, maybe even better than his best.

This is the best portrait of Jesus that I can think of, and it is wonderful that it is part of a drama set by the master storyteller realist Counter Reformation Catholic painter.

The cogs of wheels set in motion by those Art Historians who like verifiable facts will no doubt yield providential veracity. However, our eyes can tell us now that this is a most extraordinary Caravaggio masterpiece. We should recall the great Italian Art Historian, Roberto Longhi who with his eyes read the handwriting, the autographic evidence in paint and was able to rediscover the obscure master painter, Michelangelo Merisi di Caravaggio. It was he who mounted the Caravaggio exhibition in Milan in 1951 making him known to the modern world. I recall that he saw the evidence of Raphael in an unremarkable painting of a woman in the collection of Galleria Borghese. She had a heavy unconvincing red drape about her shoulders. Based solely on the trust in Longhi’s eyes, when he said remove that drape it was done. Then, the world saw the hidden unicorn under the drape. Woman with a Unicorn by Raphael can be appreciated now.

This painting has two characteristics of a Caravaggio that Wittkower points out, the close impenetrable space and the significant patterns of the composition. I have often been put off by the loose haphazard compositions of Caravaggio’s followers.

The setting of Caravaggio’s pictures is usually outside the realm of daily life. His figures occupy a narrow foreground close to the beholder. Their attitudes and movements, their sudden foreshortening into an undefined void, heightened the beholder’s suspense by giving a tense sensation of unstable space. But despite, or because of, its irrationality, his light has power to reveal and to conceal. It creates significant patterns.

“Maria Cristina Terzaghi, an art history professor at the University of Rome and an expert on Caravaggio, also said she believed that the painting was by the Italian.

Terzaghi said the work “closely resembled” the painting Caravaggio made during the first part of his time in Naples.” 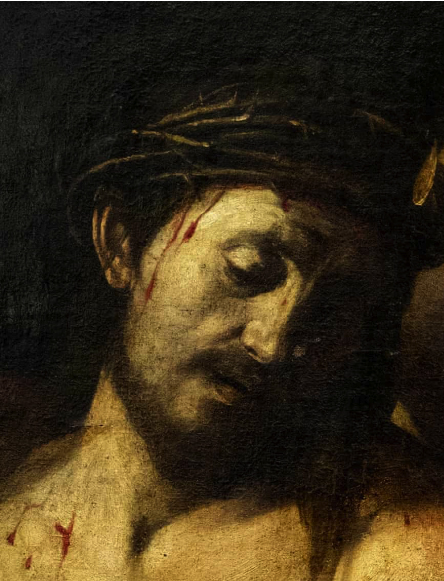 The self-portraits appear in backgrounds of the group paintings signifying autograph works.. 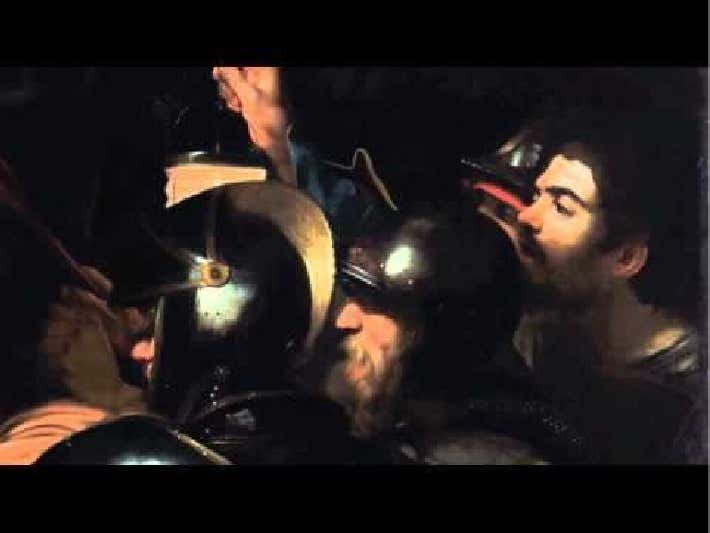 The Taking of Christ
Caravaggio paints his self- portrait in the background as a bystander holding a lantern. 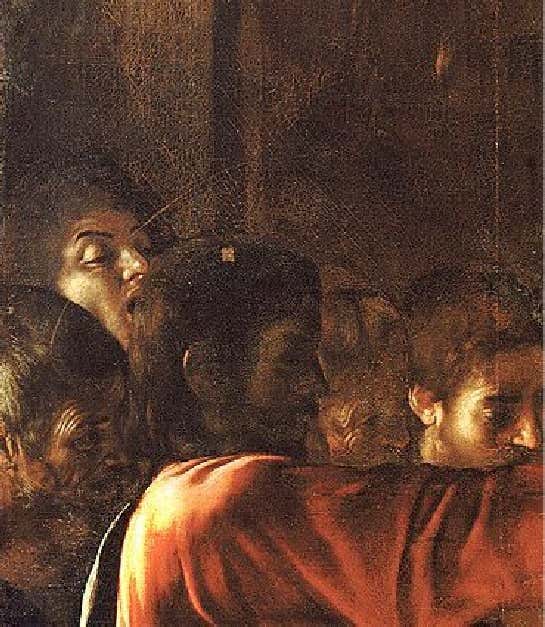 Self Portrait from the background of The Raising of Lazarus painting.